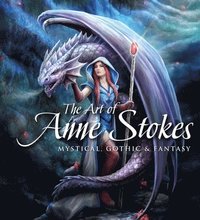 The Art of Anne Stokes

av Anne Stokes, John Woodward
Inbunden Engelska, 2019-03-08
140
Köp
Spara som favorit
Kan levereras innan julafton!
"[...] this is a book to pick up and dream about having a dragon curled up on your lap by the fire in these winter nights." - SFcrowsnest Anne Stokes is a phenomenally popular artist in the field of gothic and magical fantasy, with fans all over the world. Her roots in design and illustration have led to supremely well-crafted paintings that have been licensed for use on all manner of merchandise and her followers eagerly await each new piece. This long-overdue book showcases Anne's oeuvre in all its glory, accompanied by illuminating text about Anne and her inspirations, techniques and processes. The book is divided into thematic sections covering the full range of subjects that she has portrayed: her early work (like that for Dungeons & Dragons), the dark and the gothic, dragons, unicorns, fairies, mermaids and all that is mystical and magical. From the dark allure of Summon the Reaper to the opalescent beauty of Stargazer, this is a real treat for all fans and anyone who loves fantasy and stunning art in general.
Visa hela texten

"[...] this is a book to pick up and dream about having a dragon curled up on your lap by the fire in these winter nights." -- SFcrowsnest

Anne Stokes (foreword and co-author) has loved the world of fantasy ever since she was a child and her father read her The Hobbit. She loves to share her visions of fantasy and gothic worlds with other people. From romantic and magical enchanted lands to the dark underworld, she has created a whole host of dragons, femmes fatales, vampires, angels, fairies, unicorns and more. She lives in the north of England in Leeds, Yorkshire with her son Leo and partner John. John Woodward (co-author) is not only an author, but an artist, designer and sculptor. He has been associated with fantasy for most of his working life. Early in his career he was a designer and sculptor for 'Enchantica', a successful gift-range that featured dragons, wizards and a whole world inhabited by strange beings. John has designed for many well known potteries, such as Royal Doulton, Wedgwood and Denby. Apart from writing, he still sculpts and paints, living an idyllic life with Anne, near Leeds, West Yorkshire.