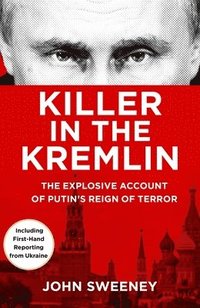 Killer in the Kremlin

av John Sweeney
Häftad Engelska, 2022-07-21
160
Köp
Spara som favorit
Finns även som
Visa alla 4 format & utgåvor
An explosive account of Putin's presidency and his long-term ambitions, including first-hand reporting from the invasion of Ukraine. A gripping and explosive account of Vladimir Putin's tyranny, charting his rise from spy to tsar, exposing the events that led to his invasion of Ukraine and his assault on Europe. In Killer in the Kremlin, award-winning journalist John Sweeney takes readers from the heart of Putin's Russia to the killing fields of Chechnya, to the embattled cities of an invaded Ukraine. In a disturbing expose of Putin's sinister ambition, Sweeney draws on thirty years of his own reporting - from the Moscow apartment bombings to the atrocities committed by the Russian Army in Chechnya, to the annexation of Crimea and a confrontation with Putin over the shooting down of flight MH17 - to understand the true extent of Putin's long war. Drawing on eyewitness accounts and compelling testimony from those who have suffered at Putin's hand, we see the heroism of the Russian opposition, the bravery of the Ukrainian resistance, and the brutality with which the Kremlin responds to such acts of defiance, assassinating or locking away its critics, and stopping at nothing to achieve its imperialist aims. In the midst of one of the darkest acts of aggression in modern history - Russia's invasion of Ukraine - this book shines a light on Putin's rule and poses urgent questions about how the world must respond.
Visa hela texten

An extraordinarily prescient and fascinating book. * NIHAL ARTHANAYAKE * This swashbuckling book is a furious attack on the Russian president. Killer in the Kremlin traces Putin's bloody career... a life littered with corpses. * The Times * 'No one in the world will forgive you for killing peaceful people.' * VOLODYMYR ZELENSKIY, PRESIDENT OF UKRAINE * 'Words have power, Putin is afraid of the truth, I have always said that.' * ALEXEI NAVALNY, LEADER OF THE RUSSIAN OPPOSITION * 'Putin is the main war criminal of the 21st century.' * IRYNA VENEDIKTOVA, UKRAINE'S PROSECUTOR-GENERAL *

John Sweeney is a writer and journalist who, while working for the BBC, has challenged dictators, despots, cult leaders, con artists and crooked businessmen for many years. As a reporter, first for the Observer and then for the BBC, Sweeney has covered wars and chaos in more than eighty countries and been undercover to a number of tyrannies, including Chechnya, North Korea and Zimbabwe. Over the course of his career, John has won an Emmy, two Royal Television Society Awards, a Sony Gold Award, a What the Papers Say Journalist of the Year Award, an Amnesty International Award and the Paul Foot Award.