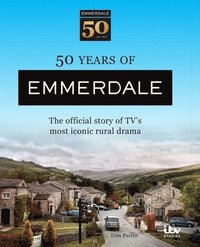 The official story of TV's most iconic rural drama

av Itv Ventures Ltd, Tom Parfitt
Inbunden Engelska, 2022-09-29
237
Köp
Spara som favorit
Everything you need to know about Britain's most iconic rural drama can be found in this beautifully designed and fact-filled book. Celebrating 50 years since the show's creation, this book is packed with history, engrossing features, long lost imagery, and plenty of behind-the-scenes detail. Each character, event, family and location is explored in exhaustive detail, with special features on Emmerdale legends, the show's villains, births, marriages, deaths, and celebrity cameos, bringing all the highlights together with interviews and insights from cast and crew members past and present. This book also includes gatefold section on key family trees, a specially commissioned map of Emmerdale and bespoke artworks for each location, making it a truly desirable package to read or give as a gift. 50 Years of Emmerdale is a stunning and engrossing book, which will delight every fan of this iconic show.
Visa hela texten

Tom Parfitt's current role as archivist has positioned him at the nexus of Emmerdale's past and present; providing insight into its history, and guidance for its ever-expanding future. His journey from the South Wales Valleys to the Yorkshire Dales began with an undergraduate degree in English & Philosophy, to a masters' degree in Scriptwriting, followed by roles in television broadcasting. He finally arrived in the rolling fields of Emmerdale as a storyliner, and later, researcher. With an encyclopaedic knowledge that's been described as "disgusting and astounding in equal measure", and nested within the cast and crew, Tom is the ideal tour guide through 50 Years of Emmerdale.