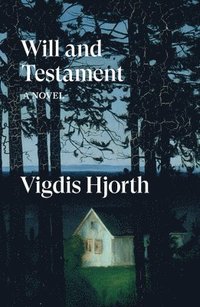 av Vigdis Hjorth
Häftad Engelska, 2019-09-10
232
Bevaka
Spara som favorit
Tillfälligt slut – klicka "Bevaka" för att få ett mejl så fort boken går att köpa igen.
Finns även som
Visa alla 2 format & utgåvor
Four siblings. Two summer houses. One terrible secret. When a dispute over her parents' will grows bitter, Bergljot is drawn back into the orbit of the family she fled twenty years before. Her mother and father have decided to leave two island summer houses to her sisters, disinheriting the two eldest siblings from the most meaningful part of the estate. To outsiders, it is a quarrel about property and favouritism. But Bergljot, who has borne a horrible secret since childhood, understands the gesture as something very different-a final attempt to suppress the truth and a cruel insult to the grievously injured. Will and Testament is a lyrical meditation on trauma and memory, as well as a furious account of a woman's struggle to survive and be believed. Vigdis Hjorth's novel became a controversial literary sensation in Norway and has been translated into twenty languages.
Visa hela texten

Hjorth parcels out the secrets with a precision worthy of Ibsen, so that the level of suspense is maintained up to the very last of the 343 pages. * Aftenposten * Vigdis Hjorth's new novel is furious and wise, trembling and stringent. Wills and Testaments examines who owns the past. This is the novel in weaponised form. * NRK * This was a novel that people could enjoy either as high literature or as a work of down-and-dirty revenge. The tabloids loved it as much as the broadsheets, and it became the bestselling novel of the year. * The Guardian * Its strong emotional truths take hold of you immediately - even before the family secret's consequences are made apparent: I dogeared page after page to mark off insights, movements, formulations. * Dagens Nyheter * The strength of the novel lies in Bergljot's convincing and continuing vulnerability, in her mixed feelings and her flaws . A clear-eyed and convincing story of a family's doomed attempt to reconcile and the limits of forgiveness. * Kirkus * Vigdis Hjorth is one of my favorite contemporary writers. -- Sheila Heti, author of Motherhood and How Should a Person Be? In a ruthless yet patiently delivered work, Hjorth does something that few writers achieve: Will and Testamentis both economical and overwhelming. -- Elsa Court * Financial Times * An extraordinary book. -- Megan Nolan * New Statesman * Devastating -- Frieze Will and Testament is a compulsively readable novel, one that turns questions of shame into weapons against silence. * Paris Review * Hjorth's thoughtful, drily funny, and often devastating novel will leave a deep and lasting impression on readers. * Publishers Weekly * Will and Testament is a reminder that it's easier to hide darkness than face it ... Hjorth argues cogently that conflicts and atrocities often stem from what a nation represses or denies. * Observer * Compelling ... Hjorth proves brilliant at revealing the stubborn, unredemptive quality of childhood suffering. -- Lara Feigel * Guardian * Even in the depths of family trauma, the scent of the forest, sea and meadow may still drift over the troubled cities and suburbs of Norwegian fiction. That forest may be a real place. It may also, as in Will and Testament, be a longed-for state of mind. -- Boyd Tonkin * Norwegian Arts * Hypnotic -- John Williams * New York Times Book Review * A powerfully humane novel about inheritance, trauma and the inheritance of trauma * Times Literary Supplement * Meticulously paced -- Megan Nolan * New Statesman - Books of the Year * Precise, contemplative, and deeply moving, it's a masterful unpacking of the tensions, secrets, and bonds that hold a family together. -- Hannah Williams * Los Angeles Review of Books * An extraordinary storyteller * LA Review of Books * Readers pining for a dose of brooding Norwegian writing in the style of Karl Ove Knausgaard may be drawn to this account of a woman's struggle to achieve reconciliation with a family that refuses to recognise she was the victim of abuse at the hands of her own father -- Angel Gurria-Quintana * Financial Times * One of the year's gems in translation was Will and Testament by Vigdis Hjorth, translated by Charlotte Barslund. A story of abuse, inheritance and the battle for the truth among a privileged Norwegian family, it grips like a vice while interrogating national as well as individual self-conception. * Guardian, Best Fiction of 2019 * Published to a storm of controversy in Vigdis Hjorth's native Norway in 2016, Will and Testament arrived in English this year. The novel is a meticulously paced account of a property dispute that bleeds poisonously back into the history of the narrator and the family members whose squabbling over a cabin comes to seem darkly absurd compared with the trauma she has suffered. -- Megan Nolan * New Statesman, Books of the year 2019 * Unsettling, beautifully constructed * Observer * Unspooling in a splenetic torrent of raw emotional intensity, [Will and Testament] speaks to wider

Vigdis Hjorth was born in 1959. She grew up in Oslo and has lived in Copenhagen, Bergen, Switzerland and France. She is the author of over a dozen novels. She has won numerous liteary awards in Scandinavia, including the Dobloug Prize in 2018.