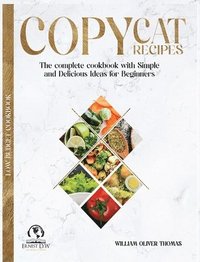 The complete cookbook with Simple and Delicious Ideas for Beginners

av William Oliver Thomas, Ernest D W
Inbunden Engelska, 2021-01-01
378
Köp
Spara som favorit
Finns även som
Visa alla 2 format & utgåvor
Do you like to eat at your favorite restaurants? But what about if we tell you that you can eat all of them at the comfort of your home?

We are not talking about food delivery here!

With this book, COPYCAT RECIPES, you can do that and at the same time you can do everything without spending a lot of money on expensive ingredients.

Surely you think that it is not easy to cook such great dishes yourself at home. Well, it is not.

This cookbook contains hundreds of recipes that you can try yourself. They are tasty and detailed recipes from the most popular restaurants around the globe.

So, you can cook delicious meals for your friends and loved ones from the comfort of your own home.

After all, one of the best ways to express your love for your family is by making them a delicious and hearty meal.

Here's an overview of what you'll find inside this book:

A delicious salad as a delicious eating companion

Who loves any snacks is absolutely in the right place.

You can eat the fruit in so many different variations

A dessert as the crowning finale to a good meal

You can bake all year round because pastry always tastes good

Non-alcoholic, which not only tastes good for children

You want to preserve food? Well, that's what we advise you to do.

You don't need to be a certified chef to get a chance to try and taste all the recipes included in this book. The cookbook will guide you in copying your favorite recipes through a short and simple to understand guide.

Are you ready to cook?

Scroll this page up and make sure you click BUY NOW!
Visa hela texten

His life had always been very complicated, but everything became more difficult since Ernest decided to leave school to join the army; at least his family didn't have to support him.

Once he finished what for him was a living hell, Ernest began to work all kinds of odd jobs in different cities, from restaurant stoves to mason suits, to scrape up some money to survive.

With heaps of blood, sweat and tears, Ernest started multiple businesses. He used every penny he earned throughout his life to further his vision.

He founded the first company in 2008, after studying various subjects at a college in Southern New York.

From there, he set a goal for himself to achieve throughout his life.

He decided that his life would revolve around helping as many people as possible with their daily struggles.

Ernest began writing books with other authors about all that he had learned in the 13 years since leaving the military.

Today, more than 500 people rely completely on his teachings to find their way in areas ranging from cooking over DIY up to business.