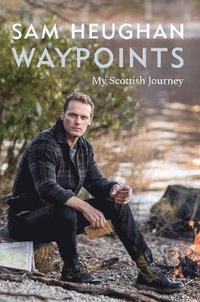 av Sam Heughan
Inbunden Engelska, 2022-10-25
237
Köp
Spara som favorit
Finns även som
Visa alla 1 format & utgåvor
AN INSTANT SUNDAY TIMES AND NEW YORK TIMES BESTSELLER 'As the title suggests, Waypoints is a rewarding mix of markers, both personal as he reflects on his life and geographical as he leads the reader along the West Highland Way' - The Scotsman 'A deeply personal and warmly entertaining memoir that fans of Sam - and Scotland - will have a joyful time devouring' - Heat 'From both his walk and his career, the common lesson is the power of persistence.' - The Times 'A pleasure for fans of the author, whisky, and Scotland.' - Kirkus 'Waypoints is a memoir with a difference! I wanted to tell the stories and share the experiences that have shaped me, but to do that I needed to challenge myself and spend some time in my own company, away from the distractions of everyday life. And for me there's no better place to reflect than in the wild Scottish Highlands.' In this journey of self-discovery, Sam Heughan sets out along the West Highland Way to explore his heritage and reflect on the personal waypoints that define him. The result is a love letter to the wild Scottish landscape that means so much to Sam, and a charming, funny, wise and searching insight to the world through his eyes. The walk itself is the backdrop for this narrative, which tells the story of Sam's life while exploring his outlook, values and interests. Sam is a figure of fascinating contrasts, a Hollywood star with deep roots in rural Scotland, he's both outgoing and content in his own company. He has strong connections with his fans while recognising the fragility and value of anonymity, and in My Peak Challenge he has created a network that brings people together as they chase individual goals. In his new book, while charting a path through a stunning wilderness, Sam maps out the moments that shaped his views on dreams and ambition, family, friendships, love and life. Waypoints is a deeply personal journey that reveals as much to Sam about himself as it does to his readers.
Visa hela texten

A pleasure for fans of the author, whisky, and Scotland * Kirkus * A deeply personal and warmly entertaining memoir that fans of Sam - and Scotland - will have a joyful time devouring. * Heat * From both his walk and his career, the common lesson is the power of persistence. * The Times *

Sam Heughan is an award-winning actor, producer, entrepreneur and philanthropist, best known for his starring role as Jamie Fraser in the hit TV show Outlander. From his early days at the Royal Lyceum Theatre Edinburgh, Sam has enjoyed a career in theatre, television and film spanning almost two decades. He is the co-author of two previous books, Clanlands and The Clanlands Almanac, both of which appeared on the Sunday Times and New York Times bestseller lists, with Clanlands becoming an instant NYT #1. Due to his outstanding contribution to charitable endeavours and artistic success he was bestowed by the University of Glasgow and the University of Stirling with honorary doctorates in 2019, and the Royal Conservatoire of Scotland in 2022. Find Sam online @samheughan