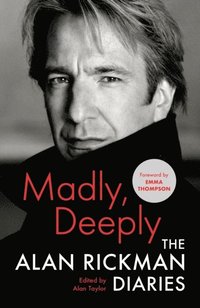 av Alan Rickman, Alan Taylor
Inbunden Engelska, 2022-10-04
282
Köp
Spara som favorit
Kan tyvärr inte levereras innan julafton.
Finns även som
Visa alla 1 format & utgåvor
A SUNDAY TIMES BESTSELLER Alan Rickman remains one of the most beloved actors of all time across almost every genre, from his breakout role as Die Hard's villainous Hans Gruber to his heart-wrenching run as Professor Severus Snape, and beyond. His air of dignity, his sonorous voice and the knowing wit he brought to each role continue to captivate new audiences today. But Rickman's artistry wasn't confined to just his performances. Rickman's writing details the extraordinary and the ordinary in a way that is anecdotal, indiscreet, witty, gossipy and utterly candid. He takes us behind the scenes on films and plays ranging from Sense & Sensibility, the Harry Potter series, Private Lives, My Name is Rachel Corrie and many more. The diaries run from 1993 to his death in 2016 and offer insight into both a public and private life. Here is Rickman the consummate professional actor, but also the friend, the traveller, the fan, the director, the enthusiast: in short, the real Alan Rickman. Here is a life fully lived, all detailed in intimate and characteristically plain-spoken prose. Reading the diaries is like listening to Rickman chatting to a close friend. Madly, Deeply also includes a foreword by Emma Thompson and a selection of Rickman's early diaries, dating from 1974 to 1982, when his acting life first began.
Visa hela texten

Mesmerising . . . Witty and debonair, caustic and fretful, for which some readers may like him less, others love him more. Madly, deeply and, better, truly he writes about what it is to be an actor * * Telegraph * * Fascinating . . . Mostly pithy, always frank * * The Times * * The star's thoughts reveal a man unwilling to suffer fools or mince his words - most of the time Alan Rickman's voice was a purr, but it masked sharp claws . . . I got the feeling he was wonderful company. These diaries confirm it -- Anthony Quinn * * Observer * * Rickman's diaries reveal the frenetic lifestyle and frequent fretting of an actor at the height of his fame . . . Just when you think Rickman might be becoming insufferable, he has a knack of bursting the actorly bubble and saying something profound * * Guardian * * His merciless verdicts on showbiz idiocy are tempered by a deep loyalty and humanity . . . So much of Rickman's character as it was preserved on screen cannot be captured in words - his unmistakable voice, his towering presence and charisma. But on the page, six years after his death, new parts of him can be found * * New Statesman * * Astute and entertaining . . . [Rickman] offers a fascinating guide to life as an actor and what it's like to be at the centre of fame. One distinct thrill is reading Rickman's short, sharp film appraisals . . . These diaries are a reminder of a warm and witty man, one who could see the quirks of life and his own part in the absurd drama of existence * * Independent * * The reader gets a real sense of the rhythms of [Rickman's] working life. He is forever on the move. [. . . ] Fully, openly, joyfully - truly, madly and, yes, deeply - he put his energies into the present moment . . . For fans, these supplementary diaries are a pure delight from start to unforgivably early finish * * Times Literary Supplement * * Rickman belonged to that anointed group whose name alone would entice you to watch a film . . . His diaries look set to enthral us still * * Herald * * You feel he always wanted to do what was right, even if it was inconvenient to himself, and that is a rare character trait . . . There is true gold in [t]here * * i * * Alan Rickman's wonderful razor-sharp tongue and mercilessly perceptive personality is revealed in all its glory . . . Packed with deliciously acerbic and indiscreet commentaries . . . This book is one last great Rickman performance: challenging, uncompromising, utterly unique and truly mesmerising * * Daily Express * *

Alan Sidney Patrick Rickman (born 21 February 1946) was an English actor and theatre director. He was a renowned stage actor in modern and classical productions and a former member of the Royal Shakespeare Company. In film his best-known work featured roles in Die Hard, Robin Hood: Prince of Thieves, the Harry Potter series and Sense & Sensibility. He won numerous awards including a BAFTA, Golden Globe and Emmy. He died on 14 January 2016. Alan Taylor is a journalist and writer. He was founding editor of The Scottish Review of Books. He has edited several acclaimed anthologies, including The Assassin's Cloak, a collection of the world's best diarists. He is the author of Appointment in Arezzo: A Friendship with Muriel Spark and the series editor of Spark's collected novels.