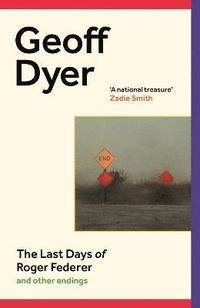 The Last Days of Roger Federer

av Geoff Dyer
Inbunden Engelska, 2022-06-09
231
Köp
Spara som favorit
Finns även som
Visa alla 2 format & utgåvor
'Quite possibly the best living writer in Britain' Daily Telegraph Much attention has been paid to so-called late style - but what about last style? When does last begin? How early is late? When does the end set in? In this endlessly stimulating investigation, Geoff Dyer sets his own encounter with late middle age against the last days and last achievements of writers, painters, athletes and musicians who've mattered to him throughout his life. With a playful charm and penetrating intelligence, he examines Friedrich Nietzsche's breakdown in Turin, Bob Dylan's reinventions of old songs, J.M.W. Turner's paintings of abstracted light, John Coltrane's cosmic melodies, Jean Rhys's return from the dead (while still alive) and Beethoven's final quartets - and considers the intensifications and modifications of experience that come when an ending is within sight. Oh, and there's stuff about Roger Federer and tennis too. This book on last things - written while life as we know it seemed to be coming to an end - is also about how to go on living with art and beauty, on the entrancing effect and sudden illumination that an Art Pepper solo or an Annie Dillard reflection can engender in even the most jaded sensibilities. Blending criticism, memoir and repartee into something entirely new, The Last Days of Roger Federer is a summation of Dyer's passions and the perfect introduction to his sly and joyous work.
Visa hela texten

The Last Days of Roger Federer feels like what Martin Amis called "a transfusion from above", but one from your smartest and funniest friend . . . entertaining . . . wide-ranging, eye-opening . . . His desire to keep going is probably hastening the end, but as long as he keeps his eye sharp and his sense of humour (which is "about so much more than being funny; it's an entire relation to - and view of - the world"), we'll be laughing, and thinking, all the way * * The Times * * Finely crafted . . . The capaciousness of Dyer's themes allow him to roam widely. While he is a connoisseur of the humdrum details of failure - often skilfully crafted for humour with himself as the target - he also has a joyous appreciation of the transcendent and the triumphant . . . Age has come upon him, but youth has not gone. It is knee supports on both legs that now keep him on the tennis court, but like Federer, it is a reserve of flair, touch, timing and a keen eye that keeps him in the game * * Guardian * * Tennis, jazz, Dylan, movies, TV, drugs, Nietzsche, Beethoven. So, why am I laughing? Because Geoff Dyer once again melds commentary and observation with intellect and wit. Bouncing between criticism and memoir, Dyer is one of the few writers whose paragraphs I can immediately reread and get more from. The twists, turns, and delights abound, and when you finally put the book down you think, "Oh, yes, I've always been this smart, haven't I?" -- STEVE MARTIN Dyer writes amusingly and sometimes poignantly about the feeling of time running out, books he can't finish (other people's, and his own), the vicissitudes of artistic fame and the perversity of being invigorated by thoughts of quitting. Few contemporary prose writers are as abundantly quotable as Dyer * * Spectator * * What a capacious sensibility this cultural magpie has, chatting to the reader in warmly companionable fashion, his prose peppered with self-deprecatory humour and footnoted asides, his erudition never pompous or platitudinous . . . these may be last days for Dyer as they are for Federer, but there's always somewhere else to go, even if it's only inwards * * Daily Telegraph * * The Last Days of Roger Federer isn't about tennis. Rather, it is about endings, and what happens to the creative spirit when one enters the autumn of one's life . . . Impish, fun and endlessly fascinating . . . His skill is to write so vividly that his interests become the reader's, too, no matter how unlikely or esoteric. In other words, his enthusiasm is infectious * * i * * There is a peculiar double joy in reading Geoff Dyer's work. At the initial level, there is the sheer joy of reading his work. On a more rarefied level, there is the pleasure of re-reading it and wondering "just how the goodness did you pull that off?" Exceptionally funny . . . very witty . . . Dyer's work manages the trick of feeling spontaneous, free-wheeling and intimate, and such a feat is hard won and honed * * Scotsman * * Sweetly transcendental . . . a book that despite its gloomy subject, bulges with energy and sings with joy * * Sunday Times * * What a lot of fun this book is. Erudite without being patronising, amusing without being cloying, and thought-provoking without being too head-scratching . The Last Days of Roger Federer is already one of my books of the year * * Irish Independent * * Most authors use language to write about things. Dyer uses things to write about language. He's a clever clogs but he's one of us at the same time. Genius -- SIMON ARMITAGE

Geoff Dyer is an award-winning author of four novels and numerous non-fiction books, including Out of Sheer Rage, Yoga for People Who Can't Be Bothered to Do It, Zona and, most recently, See/Saw. A fellow of the Royal Society of Literature and a member of the American Academy of Arts and Science, Dyer lives in Los Angeles, where he is Writer in Residence at the University of Southern California. His books have been translated into twenty-four languages.