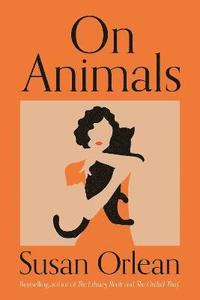 av Susan Orlean
Inbunden Engelska, 2021-11-04
177
Köp
Spara som favorit
Finns även som
Visa alla 7 format & utgåvor
'Every essay in this book is magnificent... Mesmerizing.' New York Times 'How we interact with animals has preoccupied philosophers, poets, and naturalists for ages,' writes Susan Orlean. Since the age of six, when Orlean wrote and illustrated a book called Herbert the Near-Sighted Pigeon, she's been drawn to stories about how we live with animals, and how they abide by us. Now, in On Animals, she examines animal-human relationships through the compelling tales she has written over the course of her celebrated career. These stories consider a range of creatures - the household pets we dote on, the animals we raise to end up as meat on our plates, the creatures who could eat us for dinner, the various tamed and untamed animals we share our planet with who are central to human life. In her own backyard, Orlean discovers the delights of keeping chickens. In a different backyard, in New Jersey, she meets a woman who has twenty-three pet tigers - something none of her neighbours knew about until one of the tigers escapes. In Iceland, the world's most famous whale resists the efforts to set him free; in Morocco, the world's hardest-working donkeys find respite at a special clinic. We meet a show dog and a lost dog and a pigeon who knows exactly how to get home. Equal parts delightful and profound, enriched by Orlean's stylish prose and precise research, these stories celebrate the meaningful cross-species connections that grace our collective existence.
Visa hela texten

Every essay in this book is magnificent... Each animal's turn in the warm spotlight of Orlean's gaze gives readers a chance to learn something enthralling about even the most ordinary of creatures... Mesmerizing. * New York Times * Beguiling, observant and howlingly funny. * San Francisco Chronicle * Her rich storytelling is almost soothing... Orlean is committed to investigating the dizzying multiplicity of roles animals serve - employee, best friend, harbinger of climate change - and the places where those functions intersect. * Los Angeles Times * Original, perceptive, and clever... Even though Orlean claims the animals she writes about remain enigmas, she makes us care about their fates. * Boston Globe * A close read of her new book suggests that beneath the surface variety of subjects and locales in her writing, there's an underlying unity: heedless, headlong enthusiasm... She is a moth drawn to moths who are drawn to the flame... Ms. Orlean has a rare knack for finding these people, and an even rarer one for starting them talking... Do not underestimate her curiosity, or the sharpness of her eyes. * Wall Street Journal * Spectacular... Orlean strikes a perfect balance between hilarious and informative. * Star Tribune * In appealing prose, Orlean displays her fascination and love for animals... Her appreciation of the friendship, strangeness, colors, textures and just plain mystery of animals is infectious and nicely documented. * The Columbus Dispatch * A broad meditation on how the connections we make, or fail to make, with animals mark us profoundly along our human journey. . . Orlean's tone is conversational and self-questioning. * USA Today * Entertaining and informative... Orlean's prose dazzles... Animal lovers will find much to savor. * Publishers Weekly * Delightful... Another winner featuring the author's trademark blend of meticulous research and scintillating writing. * Kirkus Reviews (starred review) * Vibrant. . . A revelry for readers wild for animals. . . Orlean's deep pleasure in learning startling facts, her often wry tales about her personal life, her omnivorous attention to detail, and her juggler's skill with words yield vivid, provocative, amusing, and wondrous stories. * Booklist * Fabulously fun. . . Orlean is such a virtuoso of unexpected joys and delights that she can make even the story of a lost dog read like a thriller. . . Orlean's high-octane enthusiasm never wanes. . . Orlean's readers will find themselves completely diverted by On Animals' irresistible menagerie. * BookPage (starred review) *

Susan Orlean has been a staff writer at The New Yorker since 1992. She is the author of seven books, including Rin Tin Tin, Saturday Night, The Orchid Thief, which was made into the Academy Award-winning film Adaptation, and The Library Book. She lives with her family and her animals in Los Angeles and may be reached at SusanOrlean.com and Twitter.com/SusanOrlean.