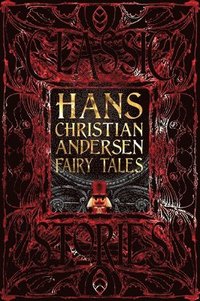 av Hans Christian Andersen
Inbunden Engelska, 2020-08-11
201
Köp
Spara som favorit
Kan tyvärr inte levereras innan julafton.
The author Hans Christian Andersen is regarded as a national treasure by his homeland Denmark, but his popularity extends far beyond his native shores. As one of the most translated authors in the world, there are hundreds of editions of his books in many languages. He is known predominantly for his remarkable series of fairy tales, many of which remain classics today, providing both inspiration for many film versions of his famous tales, as well as new collections of his stories. Evocative and poignant, their rich narratives are hugely compelling and tend to explore morality in an accessible and thought-provoking way. He was a great admirer of Dickens, and they conducted a literary friendship for many years. This latest collection celebrates Andersen's unique literary output and gathers together a large selection of much-loved tales such as 'The Little Mermaid', 'The Emperor's New Clothes', 'The Ugly Duckling', 'The Princess and the Pea' and 'The Snow Queen'.
Visa hela texten

Maria Tatar [Foreword] is the John L. Loeb Research Professor of Germanic Languages & Literatures and Folklore & Mythology at Harvard University, where she is also a Senior Fellow at the Society of Fellows. Her books include Enchanted Hunters: The Power of Stories in Childhood, The Annotated Hans Christian Andersen, and The Annotated Brothers Grimm. Hans Christian Andersen was born in Denmark in 1805. When he was fourteen years old, he moved to Copenhagen with the intention of becoming an actor, but it was his writing that would earn him success. Although he published poetry, plays and travel sketches based on his travels, he is now most remembered for his fairy tales, which have influenced generations of children's authors. The first two volumes of Fairy Tales Told for Children were published in 1835, and when his fairy tales were translated a decade later he received long-lasting recognition in the field.