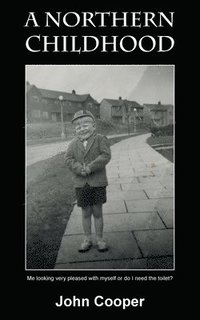 av John Cooper
Häftad Engelska, 2021-11-04
178
Köp
Spara som favorit
Finns även som
Visa alla 1 format & utgåvor
This book chronicles my early life, from my birth in 1948 in austerity Britain to leaving school in 1964. The book is written very much through my own eyes, evoking memories of a poor but happy childhood. Life in what is now a distant bygone age was a lot simpler, and any pleasures were something you whole heartedly embraced, as they did not come along too often. It has been said many times that everyone has a book in them, and had been at the back of my mind for many years, without a clear idea of what my book would be about. With hindsight I think the idea of this book was always there in my mind, as I remember vividly the first few lines which simply describe the end of my childhood, as I waited for the no 17 bus to take me home after my last football match. It was August 1964, and my first job awaited at the Cooperative Wholesale Society in Manchester. The Cooper family was probably no different from any other family on Pershore Road, working hard to survive in post war Britain, and my parents striving to bring up their children with relatively little money. My mother (our Mam) was the rock of the family, the glue that held it all together, and was fiercely protective of her children. My father I am sure had his demons, and only having one leg for almost 40 years of his life would not have been easy, both physically and psychologically. I did find it difficult to talk to him at times, and with hindsight regret not having had a closer relationship. The greater Cooper family were an interesting bunch, but had many secrets and numerous "fallings out". Things changed slowly in the 1950's, and this was epitomised in my school life. My first school Parkfield Infant/Primary was a throwback to the "old days" with some of my teachers having taught my mother, the maxim being "children should be seen but not heard". Then in the late 1950's I went to Hollin Secondary Modern School, and it was like "night and day", with much younger teachers, promoting inclusive learning. Football has always been an important part of my life, particularly my love of Oldham Athletic, who I started supporting in the late 1950's with my uncle Billy. I also loved playing the game in all kinds of situations and conditions, making many good friends along the way, some of these friendships lasting to this day. At times it was a struggle to write this book despite it being relatively short in length, but I am so glad I did - something which my children and grandchildren can remember me by.
Visa hela texten