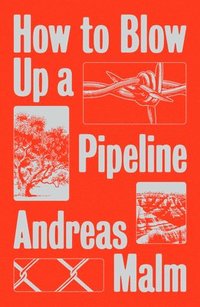 How to Blow Up a Pipeline

Learning to Fight in a World on Fire

Köp
Spara som favorit
Kan levereras innan julafton!
Finns även som
Visa alla 1 format & utgåvor
The science on climate change has been clear for a very long time now. Yet despite decades of appeals, mass street protests, petition campaigns, and peaceful demonstrations, we are still facing a booming fossil fuel industry, rising seas, rising emission levels, and a rising temperature. With the stakes so high, why haven't we moved beyond peaceful protest? In this lyrical manifesto, noted climate scholar (and saboteur of SUV tires and coal mines) Andreas Malm makes an impassioned call for the climate movement to escalate its tactics in the face of ecological collapse. We need, he argues, to force fossil fuel extraction to stop--with our actions, with our bodies, and by defusing and destroying its tools. We need, in short, to start blowing up some oil pipelines. Offering a counter-history of how mass popular change has occurred, from the democratic revolutions overthrowing dictators to the movement against apartheid and for women's suffrage, Malm argues that the strategic acceptance of property destruction and violence has been the only route for revolutionary change. In a braided narrative that moves from the forests of Germany and the streets of London to the deserts of Iraq, Malm offers us an incisive discussion of the politics and ethics of pacifism and violence, democracy and social change, strategy and tactics, and a movement compelled by both the heart and the mind. Here is how we fight in a world on fire.
Visa hela texten

"A powerful sketch of a political theory for a time of climate change." -- - David Wallace-Wells, author of The Uninhabitable Earth * blurb * "The definitive deep history on how our economic system created the climate crisis. Superb, essential reading from one of the most original thinkers on the subject." -- - Naomi Klein, author of This Changes Everything and The Shock Doctrine * endorsement * "The best book written about the origins of global warming ... Like Naomi Klein's This Changes Everything, Fossil Capital trenchantly demonstrated that capitalism and capitalists are responsible for climate change." -- - Michael Robbins * Bookforum * If a livable world requires an all-over transformation, where and when and how do we start? Perhaps with this book, a provocative manifesto from the pioneering theorist of the climate age. -- David Wallace-Wells, author of The Uninhabitable Earth How to Blow Up a Pipeline is a challenge to the left, and an important one. -- John Foster * The Battleground * A short and gripping manifesto which aims to wrench the climate movement out of its complacency * Bright Green * Timely ... Malm delivers the essay in his usual lucid and fiery style * Ecologist * One of the most important things written about the climate crisis. -- Wen Stephenson * LARB * A profoundly necessary book -- Scott W. Stern * LARB * Advocates powerfully against despair and powerlessness. -- Tatiana Schlossberg * New York Times * Written passionately...Malm argues that it may be too late to avert climate crisis, but it is far from too late to ameliorate suffering. -- Sawarin Suwichakornpong * Bangkok Post * Malm offers a critical, passionate and hopeful assessment of where it might go next. Malm's refreshing humanist ethos combined with his marxist radicalism make him one of the most exciting contemporary writers on the climate crisis, this forceful new entry into his repertoire is no exception, though perhaps a different beast from his more academic work. * Political Economy Research Centre * Refreshing and provoking * It's Freezing in LA * How to Blow Up a Pipeline makes a strong case for looking beyond non-violent activism * VICE * A humble and nuanced case... it's hard to read this book without daydreaming about sabotaging the private jets of the ultra-rich. -- Tim DeChristopher * Yes Magazine * While the book does not live up to its titular promise of providing instructions to detonate a pipeline, it does make an unflinching case for carrying out such activities in advanced capitalist countries. -- James Wilt * Canadian Dimension * Malm [has] captured the rising fury of climate activists -- Pilita Clark * Financial Times * Impossible to dismiss -- David Wallace-Wells * Times Literary Supplement * Malm is right. Shunning all violent acts will only prolong the worst. No new fossil fuel infrastructure can be created, and we need, as a society, to dismantle what we already have -- Devi Lockwood * VICE * By ruling out direct action, the climate movement robs itself, in Malm's view, of its only serious means of leverage. -- Adam Tooze * London Review of Books * Bracing * Financial Times * If you want to do something about the climate crisis instead of wallowing in despair, there's no better place to start than Andreas Malm's short treatise on the virtues of eco-sabotage. Provides a radical sort of hope. -- Abigail Weinberg * Mother Jones * Malm calls for the formation of a radical flank to the popular climate movement...[he] finds the peaceful discipline of the climate movement to be remarkable but stifling in its single mode of action, calling it gentle and mild in the extreme. -- James Mumm * Social Policy magazine * An impassioned argument for climate activists to move beyond non-violent protests...Even for those who disapprove of How to Blow Up a Pipeline, it is a useful guide to the noisiest climate activist voices. * Economist * A seductively well-written and well-researched book that argues c

Andreas Malm is a scholar of human ecology, and the author of The Progress of this Storm and of Fossil Capital, which won the Isaac and Tamara Deutscher Memorial Prize. "One of the most productive and provocative historical thinkers on the left right now." - Adam Tooze