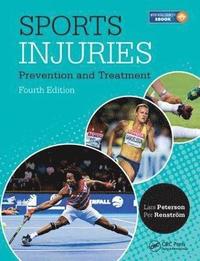 av Lars Peterson, Per A F H Renstrom
Inbunden Engelska, 2016-12-20
2162
Köp
Spara som favorit
Finns även som
Visa alla 2 format & utgåvor
As more and more people realize the cardiovascular, metabolic, and muscular benefits that regular physical activity provides, the risk for potential injury also increases. In order to provide successful treatment, all persons involved in the management of injury must have a thorough understanding of the healing process of the various tissues and also be familiar with the demands of different types of sports. Written by two world-renowned experts, Sports Injuries, Fourth Edition comprehensively covers the prevention, treatment, and rehabilitation of sports injuries. Essential reading for all athletes, coaches/trainers, physiotherapists, and doctors, the updated edition of this highly popular and well-established textbook skillfully integrates scientific background and evidence with practical application. Topics covered include: Individual risk factors for sports injuries Effects of physical inactivity on the tissues Head and face injuries in sport Cervical, thoracic and abdominal injuries in sport Back and spine injuries in sport Outdoor activities during extreme conditions Sports injuries of the lower and upper extremities Injuries in sport for the disabled Richly illustrated with more than 650 color drawings and photographs, this book covers injuries resulting from the full range of international sports. For each type of injury examined, it details the symptoms, mechanism of injury, diagnosis, treatment, rehabilitation protocols, and key points-clearly stating what both non-medical and medical professionals should do in each case of injury. This easy-to-follow textbook features a glossary of key terms and protocols with rehabilitation exercises to provide readers with a solid understanding about how to effectively treat, rehabilitate, and prevent sports injuries.
Visa hela texten

Lars Peterson, MD, Ph.D., is professor of orthopaedics at the University of Gothenburg, clinical director of the Gothenburg Medical Center, and president of the International Cartilage Repair Society. He is a former chairman of the Swedish Society for Sports Medicine. A former Premier League player in both soccer and ice hockey, he has also been the doctor for the Swedish national soccer team and a member of the medical committee of FIFA. Per Renstrom, MD, Ph.D., is professor of sports medicine at the Karolinska Institutet, Stockholm, and was previously professor of sports medicine at the University of Vermont. He is president elect of the International Society of Arthroscopy, Knee Surgery and Orthopedic Sports Medicine (ISAKOS) and president of the International Society of Medicine and Science in Tennis. He has previously been vice president of FIMS. A member of the Medical Commission of the IOC and of the Olympic Academy of Sports Science and of the medical committee of the ITF (International Tennis Federation), he is also medical director for the ATP Tour in Europe and doctor for the Swedish Davis Cup tennis team.