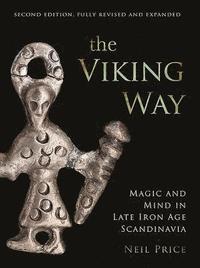 av Neil Price
Inbunden Engelska, 2019-04-30
453
Köp
Spara som favorit
Finns även som
Visa alla 1 format & utgåvor
Magic, sorcery and witchcraft are among the most common themes of the great medieval Icelandic sagas and poems, the problematic yet vital sources that provide our primary textual evidence for the Viking Age that they claim to describe. Yet despite the consistency of this picture, surprisingly little archaeological or historical research has been done to explore what this may really have meant to the men and women of the time. This book examines the evidence for Old Norse sorcery, looking at its meaning and function, practice and practitioners, and the complicated constructions of gender and sexual identity with which these were underpinned. Combining strong elements of eroticism and aggression, sorcery appears as a fundamental domain of women's power, linking them with the gods, the dead and the future. Their battle spells and combat rituals complement the men's physical acts of fighting, in a supernatural empowerment of the Viking way of life. What emerges is a fundamentally new image of the world in which the Vikings understood themselves to move, in which magic and its implications permeated every aspect of a society permanently geared for war. In this fully-revised and expanded second edition, Neil Price takes us with him on a tour through the sights and sounds of this undiscovered country, meeting its human and otherworldly inhabitants, including the Sami with whom the Norse partly shared this mental landscape. On the way we explore Viking notions of the mind and soul, the fluidity of the boundaries that they drew between humans and animals, and the immense variety of their spiritual beliefs. We find magic in the Vikings' bedrooms and on their battlefields, and we meet the sorcerers themselves through their remarkable burials and the tools of their trade. Combining archaeology, history and literary scholarship with extensive studies of Germanic and circumpolar religion, this multi-award-winning book shows us the Vikings as we have never seen them before.
Visa hela texten

The Viking Way is a precious and detailed handbook in every respect [...] the book is a first-rank culture history of the Vikings. * Shaman * The Viking Way is a saga-like page-turner. [...] It was the most important work to have been published on Norse magic when I first read it in 2002. In this second, revised and expanded edition, Price sets the benchmark for research on the Viking Way for at least another twenty years. * Time & Mind: the Journal of Archaeology, Consciousness and Culture. * Price's easy-to-read writing style allows the study to clearly present and explain an assortment of complicated subject matters, which in turn makes these intricate topics more accessible for a varied audience [...] Ultimately, this book remains one of the most influential studies on the Viking Age... * Kyngervi * In summary, readers will be pleased by this new edition in that it largely preserves the much sought-after first edition while simultaneously updating some pieces of information and adding over 500 new references to relevant works published since the first edition, some new photographs and illustrations, and an index. * Journal of English and Germanic Philology *

List of figures and tables Abbreviations Preface and acknowledgements to the first edition Preface and acknowledgements to the second edition A note on language A note on seid 1. Different Vikings? Towards a cognitive archaeology of the later Iron Age A beginning at Birka Textual archaeology and the Iron Age The Other and the Odd? An archaeology of the Viking mind? 2. Problems and paradigms in the study of Old Norse sorcery Entering the mythology Research perspectives on Scandinavian pre-Christian religion Gods and monsters, worship and superstition The shape of Old Norse religion The double world: seidr and the problem of Old Norse 'magic' Seidr in the sources Seidr in research 3. Seidr Odinn Freyja and the magic of the Vanir Seidr and Old Norse cosmology The performers The performance Engendering seidr Seidr and the concept of the soul The domestic sphere of seidr Seidr contextualised 4. Noaidevuohta Seidr and the Sami Sami-Norse relations in the Viking Age Sami religion and the Drum-Time Rydving's terminology of noaidevuohta Women and noaidevuohta The rituals of noaidevuohta The ethnicity of religious context in Viking-Age Scandinavia 5. Circumpolar religion and the question of Old Norse shamanism The circumpolar cultures and the invention of shamanism The shamanic world-view Shamanism in Scandinavia Seidr and circumpolar shamanism 6. The supernatural empowerment of aggression Seidr and the world of war Valkyrjur, skaldmeyjar and hjalmvitr Supernatural agency in battle The projection of destruction Battle magic Seidr and the shifting of shape Berserkir and ulfhednar Ecstasy, psychic dislocation and the dynamics of mass violence Weaving war, grinding battle: Darradarljod and Grottas ongr in context 7. The Viking way A reality in stories Viking women, Viking men 8. Magic and mind Receptions and reactions Cracks in the ice of Norse 'religion' Walking into the seidr: contested interpretations of Viking-Age magic Queering magic? The social world of war The Viking mind: a conclusion References Primary sources, including translations Pre-nineteenth-century sources for the early Sami and Siberian cultures Secondary sources Sources in archive Index