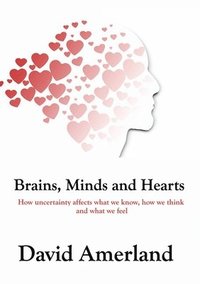 The Art of War

How Uncertainty Affects What We Know, How We Think And What We Feel

Stephen Hawkins? theory of the universe and current

In a tour-de-force of ideas stitched together by

how what we think and what we feel are influenced by

what we know and what we think we know. A key element

in any effort of self-realization, self-knowledge begins by

achieving perspective in who we are and how we got here.

This is a book of big ideas tackled delicately and with

precision. In a breathtaking view of almost 3,000 years


In the process you will find yourself questioning some

of your own assumptions regarding the world around

you and your place in it.
Visa hela texten

1. THE ANTHROPOMORPHIC UNIVERSE - A magician of little importance known as Bolus of Mendes and his 3,000 year old, runaway best-seller in which he explained "Why we are here." Francis Bacon, the mechanistic Universe of Isaac Newton and the contention that free will is illusory. The Anthropic Principle of Stephen Hawking.

2. THE POWER OF DREAMS - A brief look at dreamworlds and their meanings from Artemidorous to the contentions of physicist John Wheeler. The nature of consciousness. The way we perceive Time and the theory of superstrings and the multiverse.

3. IN THE PLANE OF THE IMPOSSIBLE - Images of the sleeping brain. The dreams of scientists. The Neoplatonists and the etheric plane. Freud, Jungian psychology and the theory of astral travel. Galileo, Gödel and the Complex Plane of mathematics. Mandelbrot, fractals and the magic of the natural world. Crowley's concept of man, the principal of universality, and the etheric nature of Cyberspace.

4. THE MULTI-DIMENSIONAL NIGHTMARE - Man, the microcosm, and Giordano Bruno. The strange connections between Charles II, Dr William Harvey, the discovery of the circulation of the blood, and Descartes which eventually led to a paradigm shift. The correlation of abstract mathematics to a concrete reality, and the establishing of Francis Bacon's scientific principles. Consciousness and the New Physics, Heisenberg and the perceived, ingrained falsehood of reality. Hilbert, Bohr, Heisenberg & Einstein: the clash of the titans in the fight for the answers to the really Big Questions. The beginning of the participatory model of the universe.

5. IN THE GRIP OF A SPELL - How science won over magic an uneasy victory that would later lead to a new rebellion. The advent of the belief in a conscious planet; and the new realities revealed within the nefarious cloud chambers of particle accelerators. The strange beliefs of Indian tradition and the ready-made converts they've found amongst nuclear and particle physicists. The illusory nature of reality.

6. CHILDREN OF A GREATER GOD - The place of religion in both science and magic and the question of the role of a god for the proponents of either discipline. The 'fixing' of reality. Paul Davies and the Big Bang singularity. Carbon life forms and the cyclical nature of things. de Chardin and Tipler and the Omega Point theory that promises to give us god-like powers over the forces of Nature.

8. UNIVERSAL SUPERSTRINGS AND THE INNER SPACE CONNECTION -  The link between matter, energy and the mind. Ha...