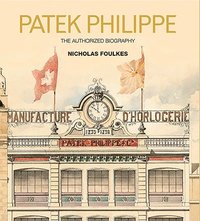 av Nicholas Foulkes
(1 röst)
Inbunden Engelska, 2016-12-15
1587
Bevaka
Spara som favorit
Tillfälligt slut – klicka "Bevaka" för att få ett mejl så fort boken går att köpa igen.
The definitive history of the world-renowned watchmakers, Patek Philippe. Founded in Geneva in 1839, and to this day a family-owned company, Patek Philippe makes what are widely regarded as the world's finest mechanical watches. Among them, the most valuable watch ever made: the famous 1933 pocket watch known as the "Graves" supercomplication, which sold at auction in 2014 for US$23,934,00. A cult among collectors, Patek Philippe and its timepieces have been treasured by kings and princes, rock stars, and sportsmen. Notable customers of the storied Swiss watchmaker include Queen Victoria, and her great-great-granddaughter HM Queen Elizabeth II. Drawing exclusively on interviews with the company's owners and with staff and watchmakers past and present, as well as on hitherto unseen documents from the company's archives, Patek Philippe: The Authorized Biography, celebrates the history of a unique company. Nicholas Foulkes traces the Patek Philippe history from founder Antoine Norbert de Patek's early life in Poland as a young cavalry officer fighting in a doomed uprising. He recounts Patek's exile, his life in Geneva, his meeting with gifted watchmaker Jean Adrien Philippe, and the 1932 purchase of the company by the Stern family who, over four generations, have turned it into the legend that it is today. "I am very pleased to see the history of my family's company come to life in this excellent volume. This is the first time that the Patek Philippe archive has been accessed and brought to life in a factual and definitive work. Nicholas Foulkes has perfectly recreated the atmosphere and details of our 175-year journey." - Philippe Stern, Honorary President of Patek Philippe
Visa hela texten

Nicholas Foulkes is the author of around 20 books. His most recent include, 'Bals: Legendary Costume Balls of the Twentieth Century' and 'Swans, Legends of the Jet Society'. His books have been published by Little, Brown & Company, Weidenfield and Nicolson, Assouline, Random House and Thomas Dunne Books in the USA. He contributes to a wide range of newspapers and magazines around the world. He is a columnist for Country Life; a contributing editor to The FT's How To Spend It Magazine, a contributing editor to Vanity Fair; and luxury editor of British GQ. He launched and continues to edit Vanity Fair's twice yearly watch magazine On Time. He launched and continues to edit Vanity Fair on Art. He is co-founder and editor-in-chief of Finch's Quarterly Review. In 2007 he was named Havana Man of the Year by the Cuban government, having been nominated for this award on four previous occasions. In 2009 he was appointed to the board of the Norman Mailer Centre. He is a graduate of Hertford College Oxford and lives in London with his wife and two sons.