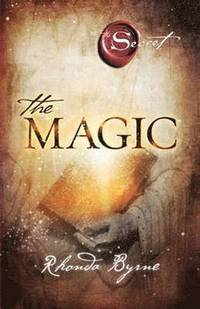 av Rhonda Byrne
(7 röster)
Häftad Engelska, 2012-03-06
136
Köp
Spara som favorit
Kan levereras innan julafton!
Finns även som
Visa alla 1 format & utgåvor
In The Magic a great mystery from a sacred text is revealed, and with this knowledge Rhonda Byrne takes the reader on a life-changing journey for 28 days. Step by step, day-by-day, secret teachings, revelations, and scientific law are brought together to form 28 simple practices that open the reader's eyes to a new world, and lead them to a dream life.
Visa hela texten

Rhonda Byrne is the creator behind The Secret, a documentary film that swept the world in 2006, changing millions of lives and igniting a global movement. Later that same year, Rhonda's book of The Secret was released. It has been translated into more than fifty languages and remains one of the longest-running bestsellers of all time. Rhonda has written four more bestselling books: The Power in 2010, The Magic in 2012, Hero in 2013, and The Greatest Secret in 2020.