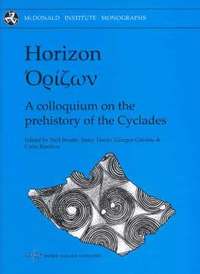 A Colloquium on the Prehistory of the Cyclades

av Giorgos Gavalas, A Colin Renfrew, Jennifer Doole, Giorgios Gavalas, Colin Renfrew
Inbunden Engelska, 2008-04-01
759
Köp
Spara som favorit
The Cycladic Islands of Greece played a central role in Aegean prehistory, and many new discoveries have been made in recent years at sites ranging in date from the Mesolithic period to the end of the Bronze Age. In the well-illustrated chapters of this book, based on the recent conference held at the McDonald Institute for Archaeological Research in Cambridge, international scholars including leading Greek archaeologists offer new information about recent developments, many arising from hitherto unpublished excavations. The book contains novel theoretical insights into the workings of culture process in the prehistoric cultures of the islands. It will be an indispensable resource for students and scholars interested in the prehistory of the Aegean and in the contributions made to its development by the prehistoric inhabitants of the Cyclades.
Visa hela texten

Giorgos Gavalas (born 30 September 1968) is an independent scholar (PhD in Archaeology, University of Ioannina, Greece). Fellow of the Archaeological Society of Athens and currently Secretary of the Cycladic Studies Society. Formerly archaeologist with the Hellenic Ministry of Culture (Athens 2014-2015, central departments 2006-2009, Amorgos and Rhodes 1992-2005) and former research associate at the McDonald Institute for Archaeological Research (2001-2006). His main research interests lie in the archaeology of the Cyclades, both prehistoric and classical, and he is a specialist in textile tools and stone vessels. Neil Brodie has held positions at the British School at Athens, the McDonald Institute for Archaeological Research at the University of Cambridge, Stanford University's Archaeology Center, and the Scottish Centre for Crime and Justice Research at the University of Glasgow. He has worked on archaeological projects in the United Kingdom, Greece and Jordan, and continues to work in Greece. Colin Renfrew (Lord Renfrew of Kaimsthorn, born 25th July 1937) was formerly Disney Professor of Archaeology and Director of the McDonald Institute for Archaeological Research in the University of Cambridge, and Master of Jesus College Cambridge from 1986 to 1997. He has excavated at a number of sites in prehistoric Greece and in the Orkney Islands, and is the author of many publications, including Prehistory: the making of the human mind. He is Fellow of the British Academy, Foreign Associate of the National Academy of Sciences of the USA, and was the recipient of the Balzan Prize in 2004.