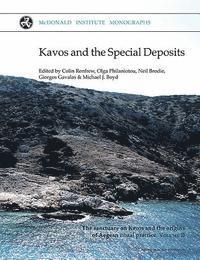 Kavos and the Special Deposits

The sanctuary on Keros and the origins of Aegean ritual

av Colin Renfrew, Olga Philaniotou, Neil Brodie, Giorgos Gavalas, Michael Boyd
Inbunden Engelska, 2016-02-22
739
Köp
Spara som favorit
Volume II describes the excavation and finds from the Special Deposits at Kavos at the sanctuary on Keros lying opposite the settlement on the islet of Dhaskalio (described in Volume I). The finds of marble from the Special Deposit South are described in Volume III, and the pottery in Volume V. The sanctuary at Kavos, dating from c. 2700 BC to 2400 BC has yielded the richest ritual deposits of the early bronze age Cyclades. The finds are presented here in their excavation contexts, and the significance of the Special Deposit South as a ritual deposit is examined in the context of Aegean prehistory.
Visa hela texten

The volume is a monument to thoroughness and transparency... At least as important as the volume's fascinating and far-reaching conclusions for the archaeology, politics and rituals of the ancient Cyclades, however, are the highly detailed studies of the archaeological material, which will permit readers to test their own theories. It is through such exhaustive studies that progress is promoted. This is an essential volume for any archaeological library of import with an impressive host of authors who are to be commended for their high-quality work. * Antiquity *