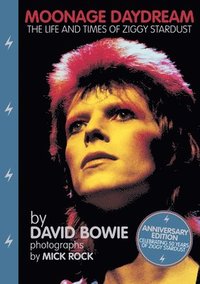 The Life & Times of Ziggy Stardust

av David Bowie, Mick Rock
Inbunden Engelska, 2022-06-21
500
Köp
Spara som favorit
'The closest we'll ever get to a straight up Bowie autobiography - but who'd ever want anything straight-up from Bowie?' - Rolling Stone In 2002, David Bowie and Mick Rock created Moonage Daydream, the defining document of the life and times of Ziggy Stardust. Twenty years later, it remains the closest readers will get to understanding Bowie through his own words. Alongside over 600 photographs taken by Mick Rock, Bowie's personal and often humorous commentary gives unprecedented insight into his work and the creation of his most memorable persona. Readers can see how Bowie singlehandedly challenged and elevated 1970s culture through his style, his inspirations ranging from Kubrick to Kabuki, and his creative spirit, which endures through the decades. Moonage Daydream is the essential David Bowie book. First published as a signed limited edition, Moonage Daydream sold out in a matter of months and became lore among David Bowie fans. Now, on the 50th anniversary of Bowie's acclaimed album, The Rise and Fall of Ziggy Stardust and the Spiders from Mars, the book is available again. Published in a new larger format, this uncut edition keeps to Bowie and Rock's original vision, allowing us to explore Moonage Daydream the way the authors intended. 'This is a book of extraordinary photographs. Ziggy Stardust blazed briefly but intensely, and I am delighted to see his life and times as a rock'n'roll star immortalised in this book.' - David Bowie
Visa hela texten

'It's a massive coffee-table art book, with lavish images of Bowie in the Seventies from photographer Mick Rock. But the main attraction of Moonage Daydream is the text by the man himself. He's in top form, whether he's shopping for shoes with Cyrinda Foxe (who teaches him to wear "palm-tree'd fuck-me pumps") or sipping tea with Elton John ("We didn't exactly become pals, not really having that much in common, especially musically"), or partying it up with Mick Jagger ("I have absolutely no recollections of this party at all"). The closest this world will ever get to a straight-up Bowie autobiography - but who'd ever want anything straight-up from Bowie?' - Rob Sheffield, 'Rolling Stone's Greatest Rock Memoirs of All Time', Rolling Stone 'There is more than enough for both the casual Bowie fan and the obsessive. These photographs trace the birth of one of the biggest, most influential pop ideas ever: the notion that a pop performer could, on record as well as on stage, reinvent himself creatively by inhabiting various personas.' - Sean O'Hagan, 'Pop's first Space Invader', The Guardian

David Bowie In 1972 David Bowie released the instant classic The Rise and Fall of Ziggy Stardust and The Spiders from Mars-a record without which any Greatest Albums of All Time list is simply incomplete. 1972 would be the year that Bowie ascended to international superstardom. Bowie's extra-terrestrial Rockstar creation Ziggy Stardust staged one of the most spectacular and innovative live shows to date, expanding the parameters of the live rock show and singlehandedly launching a worldwide glam explosion. Mick Rock Otherwise known as 'The Man Who Shot the Seventies' - was a legendary rock photographer. Rock is best remembered for taking iconic and immersive images of David Bowie, Lou Reed, Syd Barrett, Iggy Pop, Queen, the Sex Pistols, The Ramones, Blondie and many others. Born in London, Rock went on to reside in New York City for over 35 years, where he continued to photograph artists such as Lady Gaga and The Killers. Following his passing, he was fondly remembered by many musicians and photographers alike for his talent of distinctly capturing his subject.