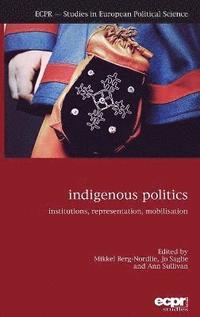 av Mikkel Berg-Nordlie, Jo Saglie, Ann Sullivan
Inbunden Engelska, 2015-08-01
929
Köp
Spara som favorit
Finns även som
Visa alla 1 format & utgåvor
Over the last fifty years, indigenous politics has become an increasingly important field of study. Recognition of self-determination rights are being demanded by indigenous peoples around the world. Indigenous struggles for political representation are shaped by historical and social circumstances particular to their nations but there are, nevertheless, many shared experiences. What are some of the commonalities, similarities and differences to indigenous representation, participation and mobilisation? This anthology offers a comparative perspective on institutional arrangements that provide for varying degrees of indigenous representation, including forms of self-organisation as well as government-created representation structures. A range of comparative and country-specific studies provides a wealth of information on institutional arrangements and processes that mobilise indigenous peoples and the ways in which they negotiate alliances and handle conflict.
Visa hela texten

'The study of indigenous peoples received a new impetus in the late 1960s, when activist politics drew global attention to the status of these marginalised groups. While an impressive range of studies from many disciplines - notably history, anthropology, sociology and law - has since then advanced our understanding of indigenous society, the contribution of political science has for long been limited. This volume is an important and timely intervention in analysis of the politics of indigenous peoples. It offers a valuable, systematic overview of the comparative politics of indigenous societies, enriched by well-informed case studies of the more prominent of these. The editors and contributors are to be congratulated for bringing the politics of indigenous societies so decisively into the academic mainstream.' John Coakley, Queen's University Belfast and University College Dublin 'Indigenous politics has become more important during the last couple of decades. This book offers an interesting insight into institutional variation in indigenous political arrangements, with comprehensive information on New Zealand, Australia, Bolivia, Brazil, USA, Canada and the Nordic countries. Even given the great variation across countries and continents, indigenous politics is increasingly influenced by international processes and by developments in international law. This book emphasises the importance of these changes, but also underlines the extensive differences among countries adapting to them. In doing so, it highlights the importance of each country's historical traditions, in which the changing relationship between indigenous sovereignty and co-optation is playing itself out. An important read for anyone interested in this field of growing interest and relevance.' Per Selle, University of Bergen

Mikkel Berg-Nordlie is a researcher at NIBR - Norwegian Institute for Urban and Regional Research. He is currently writing a history PhD at the University of Tromso - the Arctic University of Norway. His research is mainly on political organisation, representation, governance and discourses related to indigenous peoples and other ethnic minorities particularly in, but not limited to, Russia and the Nordic countries. Jo Saglie is Research Professor at the Institute for Social Research, Oslo, Norway and Adjunct Senior Researcher at the Sami University College in Guovdageaidnu, Norway. His main research interests include party organisations and intra-party democracy, local elections and local democracy, as well as indigenous politics. Ann Sullivan is a member of the northern Ngapuhi tribe of New Zealand. She is an Associate Professor of Maori Studies and co-Head of Te Wananga o Waipapa/School of Maori Studies and Pacific Studies, University of Auckland. Her main research interests are Maori electoral behaviour, representation and public police policy. Her teaching covers a range of areas of Maori development with an emphasis on public policy.