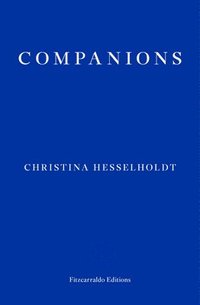 av Christina Hesselholdt
Häftad Engelska, 2017-08-30
164
Köp
Spara som favorit
Kan levereras innan julafton!
Finns även som
Visa alla 1 format & utgåvor
Camilla, Charles, Alma, Edward, Alwilda and Kristian are a circle of friends hurtling through mid-life. Structured as a series of monologues jumping from one friend to the next, Companions follows their loves, ambitions, pains and anxieties as they age, fall sick, have affairs, grieve, host dinner parties and move between the Lake District, Berlin, Lisbon, Belgrade, Mozambique, New York and, of course, Denmark. In her first book to be translated into English, Christina Hesselholdt explores everyday life, the weight of the past and the difficulty of intimacy in a uniquely playful and experimental style. At once deeply comic and remarkably insightful, Companions is an exhilarating portrait of life in the twenty-first century.
Visa hela texten

'Hesselholdt's most penetrating insights into the texture of lived experience come in moments of vivid imagery and unexpected humor, which bridge the weight of biography and the lightness of an instant. ... those who find connections among these disparate moments will be rewarded with a rare and fragile experience: a rediscovery of the strength of narrative bonds, impossible to dissolve and difficult to forget.' - Alexandra Kleeman, New York Times '[A]n affecting homage to, and a high-spirited literary dissection of, Woolf's book [The Waves] ... Companions, translated with care and elan by Paul Russell Garrett, is not at all a gloomy work. Hesselholdt's touch is light, even mocking, as much as her subject matter is grave. There is a dancing intelligence roaming free here, darting back and forth among ideas and sensations. Her novel is a deceptively nonchalant defence of modernism and a work of pure animation.' - Catherine Taylor, Financial Times 'In her meditative and engrossing English-language debut, Hesselholdt dives into the consciousnesses of six cerebral, animated, eccentric, and occasionally melancholy Danes. ... Their stories are told in introspective monologues by turns splenetic and lyrical. The anxious characters wrestle with whether to retreat from or let oneself be "consumed by life," turning to the "saturate[d]" works of Woolf, Lawrence Durrell, Thomas Bernhard, and Sylvia Plath for sustenance. For this bookish lot, literature supplies invaluable companions, and readers will be captivated.' - Publishers Weekly, starred review 'At times, the language is poetic and nostalgic, at others almost clinical, which reflects the internal conflicts of the characters well. Hesselholdt writes with a sharp ability to pinpoint the trials and tribulations that plague the human condition...' - Buzz Magazine 'A blend of arresting detail, digression, and erudition tinged with nostalgia characterizes this novel, which ranges back and forth between different points of view. ... Both the difficulty and the pleasure of being human shine through in these pages.' - Kirkus

Christina Hesselholdt, born in 1962, studied at the Danish Academy of Creative Writing in Copenhagen. Her first novel, Kokkenet, Gravkammeret & Landskabet [The Kitchen, the Tomb & the Landscape], was published in 1991. She has written fifteen books of prose, and received critical acclaim and awards for her books, including the Beatrice Prize in 2007 and the Critics' Prize in 2010. She was included in Dalkey Archive's Best European Fiction 2013. Companions is her first book to appear in English. Her latest work, Vivian, a novel about the photographer Vivian Maier, was published by Rosinante in 2016. It won the Danish Radio Best Novel Award 2017 and has been shortlisted for the Nordic Council Literature Prize in 2017.