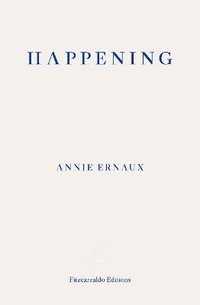 Happening - WINNER OF THE 2022 NOBEL PRIZE IN LITERATURE

av Annie Ernaux
Häftad Engelska, 2019-02-13
130
Köp
Spara som favorit
Finns även som
Visa alla 2 format & utgåvor
In 1963, Annie Ernaux, 23 and unattached, realizes she is pregnant. Shame arises in her like a plague: understanding that her pregnancy will mark her and her family as social failures, she knows she cannot keep that child. This is the story, written forty years later, of a trauma Ernaux never overcame. In a France where abortion was illegal, she attempted, in vain, to self-administer the abortion with a knitting needle. Fearful and desperate, she finally located an abortionist, and ends up in a hospital emergency ward where she nearly dies. In Happening, Ernaux sifts through her memories and her journal entries dating from those days. Clearly, cleanly, she gleans the meanings of her experience.
Visa hela texten

'The author of one of the most important oeuvres in French literature, Annie Ernaux's work is as powerful as it is devastating, as subtle as it is seething.' - Edouard Louis, author of The End of Eddy 'Happening is gripping and painfully inevitable to read - like a thriller. I felt close to Annie Duchesne, in her aloneness, in a way I've rarely felt close to a character in a book. Women will be grateful to Ernaux for her wisdom, concision, and commitment to writing about death and life.' - Daisy Hildyard, author of Emergency 'I've just finished Happening by Annie Ernaux, in which she writes about her experience of unwanted pregnancy and illegal abortion in 1960s France. The Years was one of my favourite reads of last year and that same rigorous clarity of vision - even when dealing with the complex or ambiguous - is just as evident here again. The experience of living simultaneously on the inside and outside of your own body is very particular to the female experience I think - and not only in relation to pregnancy but in myriad other ways too. I like the measured, unforgiving way she works her way through the logic, or illogic, of that. I find her work extraordinary.' - Eimear McBride, author of Strange Hotel 'Universal, primeval and courageous, Happening is a fiercely dislocating, profoundly relevant work - as much of art as of human experience. It should be compulsory reading.' - Catherine Taylor, Financial Times 'Meticulous catalogues of longing, humiliation, class anxiety and emotional distress, Ernaux's books are unsparing in detail, pitiless in tone. In contrast to those of so many of her confession-minded peers, her shock tactics feel principled, driven less by narcissism or the need for self-justification than by some loftier impulse: a desire to capture the past as it was, undistorted by faulty memories, moral judgments or decorative literary flourishes.' - Emily Eakin, New York Times Book Review 'Ernaux's work is an attempt at truth. Not a narrative bend on truth, but an "endeavour to revisit every single image".... Ernaux's work is important. Not just because of her subject matter, but because of the way she hands it over: the subtle contradictions; her dispassionate stoicism, mixed with savagery; her detailed telling, mixed with spare, fragmented text.' - Niamh Donnelly, Irish Times 'This short book ... is one of the most powerful memoirs I have ever read. Ernaux is famed in France, and is gathering fame abroad ... as an autobiographer of unusual talent and insight, virtually creating (although she disavows the term) a genre called "autofiction", a hybrid style mixing, as the name suggests, autobiography and fiction, although there is nothing in Happening that suggests any fictional element. This is the truth, as bare as it can be told, although every so often Ernaux reminds us, carefully, that memory is slippery.' - Nicholas Lezard, Dhaka Tribune

Born in 1940, Annie Ernaux grew up in Normandy, studied at Rouen University, and later taught at secondary school. From 1977 to 2000, she was a professor at the Centre National d'Enseignement par Correspondance. Her books, in particular A Man's Place and A Woman's Story, have become contemporary classics in France. Audrey Diwan's adaptation of Happening won the Golden Lion at the 2021 Venice International Film Festival. In 2022, Annie Ernaux was awarded the Nobel Prize in Literature.