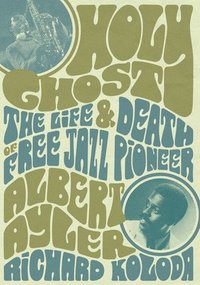 The Life And Death Of Free Jazz Pioneer Albert Ayler

av Richard Koloda
Häftad Engelska, 2022-11-08
260
Köp
Spara som favorit
Holy Ghost is the first extended study of free jazz saxophonist Albert Ayler, who is seen today as one of the most important innovators in the history of jazz. Ayler synthesized children s songs, La Marseillaise, American march music, and gospel hymns, turning them into powerful, rambunctious, squalling free-jazz improvisations. Some critics considered him a charlatan, others a heretic for unhinging the traditions of jazz. Some simply considered him insane. However, like most geniuses, Ayler was misunderstood in his time. His divine messages of peace and love, apocalyptic visions of flying saucers, and the strange account of the days leading up to his being found floating in New York s East River are central to his mystique, but, as Koloda points out, they are a distraction, overshadowing his profound impact on the direction of jazz as one of the most visible avant-garde players of the 1960s and a major influence on others, including John Coltrane. A musicologist, and friend of Don Ayler, Albert s troubled trumpet-playing brother, Richard Koloda has spent over two decades researching this book. He follows Ayler from his beginnings in his native Cleveland to France, where he received his greatest acclaim, to his untimely death on November 25, 1970, at age thirty-four, and puts to rest speculation concerning his mysterious death. A feat of biography and a major addition to jazz scholarship, Holy Ghost offers a new appreciation of one of the most important and controversial figures in the twentieth-century music.
Visa hela texten

Reading like an action-packed novel, Koloda s biography is definitive, colorful, and a major addition to the literature of American music and jazz. - Scott Yanow, author of Jazz On Record 1917 76

Richard Koloda has a master s degree in Musicology from Cleveland State University (having written a thesis on the piano music of Frederic Rzewski). He was a contributor on the critically acclaimed documentary My Name Is Albert Ayler by Swedish filmmaker Kasper Collin, and was a consultant on Revenant Records ten-CD retrospective of Ayler, which has been called the Sistine Chapel of box sets. Richard lives in Wayland, Ohio, where he practices law. When he is not in court, he is working on his second book (not about music).