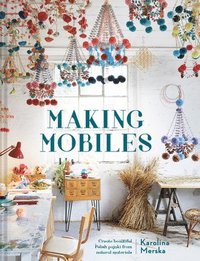 av Karolina Merska
(1 röst)
Inbunden Engelska, 2021-05-13
254
Köp
Spara som favorit
In this practical book, learn how to make beautiful, folk mobiles - also known as 'pajaki' - to decorate your home or event space in show-stopping style. Suspended from the ceiling comes a colourful cascade of cut-outs, pompoms and paper flowers. These richly ornamented chandeliers have caught the attention of interior and design shows across the world and, in her first book, Polish artist Karolina Merska demonstrates everything you need to know to master making these beautiful mobiles. From the traditional to the contemporary, there are 15 projects for every interior and skill level with step-by-step instructions throughout. Let your imagination run wild, as Karolina shows you how you can make striking pajaki with simple materials including rye or paper straws, yarn and even fresh flowers. The practical section of the book helps you to master the building blocks of pajaki - from intricate paper flowers and geometric decorations to delicate 'kalinka', 'hedgehog' and 'tube' pompoms - before showing you how to recreate Karolina's beautiful designs. You'll be guided throughout by straightforward instructions and the projects intensify in skill level and complexity as your confidence grows. Start by constructing a small beginner's mobile or mini Christmas decorations, then try your hand at more detailed projects including a fresh flower mobile that's perfect for weddings, a geometric pajak that any interior designer would covet, and a giant pajak with serious wow-factor. So hang your mobiles high and proud; combining history, heritage, time-honoured techniques and bright modern designs, you'll fall in love with making mobiles.
Visa hela texten

Originally from Poland, Karolina Merska moved to the UK in 2007 shortly after obtaining an MA in History of Art at the Jagiellonian University in Krakow. Inspired by Polish folk art, she started making Pajaki chandeliers in 2015. Her work has been celebrated internationally and publicised by Channel 4, The World of Interiors, House and Garden, Elle Decoration, Elle Deco Italia, The Telegraph, Time Out, Harper's Bazaar and many more. Exhibitions featuring Karolina's work include the London Design Festival 2016, 2017, Ace Hotel London 2016, Brussels Design September 2017 and Copenhagen 2017. Karolina loves sharing her knowledge and teaches pajaki workshops in her studio in East London and around the world. A short film about her work can be found here: https://vimeo.com/180807251