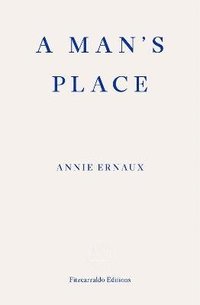 A Man's Place - WINNER OF THE 2022 NOBEL PRIZE IN LITERATURE

av Annie Ernaux
Häftad Engelska, 2020-10-28
132
Köp
Spara som favorit
Finns även som
Visa alla 1 format & utgåvor
Annie Ernaux's father died exactly two months after she passed her exams for a teaching certificate. Barely educated and valued since childhood strictly for his labour, Ernaux's father had grown into a hard, practical man who showed his family little affection. Narrating his slow ascent towards material comfort, Ernaux's cold observation in A Man's Place reveals the shame that haunted her father throughout his life. She scrutinizes the importance he attributed to manners and language that came so unnaturally to him as he struggled to provide for his family with a grocery store and cafe in rural France. Over the course of the book, Ernaux grows up to become the uncompromising observer now familiar to the world, while her father matures into old age with a staid appreciation for life as it is and for a daughter he cautiously, even reluctantly admires.
Visa hela texten

'Ernaux has inherited de Beauvoir's role of chronicler to a generation.' - Margaret Drabble, New Statesman 'A lesser writer would turn these experiences into misery memoirs, but Ernaux does not ask for our pity - or our admiration. It's clear from the start that she doesn't much care whether we like her or not, because she has no interest in herself as an individual entity. She is an emblematic daughter of emblematic French parents, part of an inevitable historical process, which includes breaking away. Her interest is in examining the breakage.... Ernaux is the betrayer and her father the betrayed: this is the narrative undertow that makes A Man's Place so lacerating.' - Frances Wilson, Telegraph 'Not simply a short biography of man manacled to class assumptions, this is also, ironically, an exercise in the art of unsentimental writing ... The biography is also self-reflexive in its inquiry and suggests the question: what does it mean to contain a life within a number of pages?' - Mia Colleran, Irish Times 'Ernaux understands that writing about her parents is a form of betrayal. That she writes about their struggle to understand the middle-class literary world into which she has moved makes that betrayal all the more painful. But still she does it - and it is thrilling to read Ernaux working out, word by word, what she deems appropriate to include in each text. In being willing to show her discomfort, her disdain and her honest, careful consideration of the dilemmas of writing about real, lived lives, Ernaux has struck upon a bold new way to write memoir.' - Ellen Pierson-Hagger, New Statesman 'No-one writes about family relationships with the nuance, both emotional and analytical, that Ernaux does, and such a reflective, self-critical perspective is even more precious. Her exploration of language in their household is sharp.... It might initially be read as a cold portrait, but the emotions and passionate thought rage through the taut writing. Likened to Simone de Beauvoir for her astute chronicling of a generation, Ernaux's prose is intimate and unforgettable.' - Dazed 'An unsentimental portrait of a man loved as a parent, admired as an individual but, because of habits and education, heartbreakingly apart. Moving and memorable.' - Kirkus 'An affecting portrait of a man whose own peasant upbringing typified the adage that a child should never be better educated than his parents.' - Publishers Weekly

Born in 1940, Annie Ernaux grew up in Normandy, studied at Rouen University, and later taught at secondary school. From 1977 to 2000, she was a professor at the Centre National d'Enseignement par Correspondance. Her books, in particular A Man's Place and A Woman's Story, have become contemporary classics in France. In 2022, she was awarded the Nobel Prize in Literature.