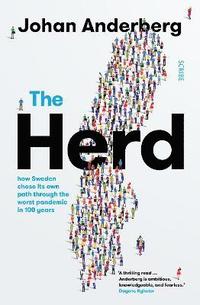 av Johan Anderberg
(1 röst)
Häftad Engelska, 2022-04-07
201
Köp
Spara som favorit
A real-life thriller about a nation in crisis, and the controversial decisions its leaders made during the COVID-19 pandemic. First, the government instituted no restrictions. Then, it didn't order the wearing of face masks. While the rest of the world looked on with incredulity, condemnation, admiration, and even envy, a small country in Northern Europe stood alone. As COVID-19 spread across the globe rapidly, the world shut down. But Sweden remained open. The Swedish COVID-19 strategy was alternately lauded and held up as a cautionary tale by international governments and journalists alike - with all eyes on what has been dubbed 'The Swedish Experiment'. But what made Sweden take such a different path? In The Herd, journalist Johan Anderberg narrates the improbable story of a small nation that took a startlingly different approach to fighting the virus, guiding the reader through the history of epidemiology and the ticking-clock decisions that pandemic decision-makers were faced with on a daily basis.
Visa hela texten

'The Herd is a thrilling read about tight-knit groups of microbiologists and epidemiologists, old grudges, new alliances, and fiery emails ... Anderberg is ambitious, knowledgeable, and fearless.' -- Dagens Nyheter 'The Herd is exemplary journalism of the kind that comes close to the truth through skilled craftsmanship. Anderberg portrays the events in the right order. He relies on relevant facts. He puts the last year in a historical context. He examines without preconceived opinions ... Anderberg's book is like a Corona commission in its own right and a beautiful example of the important role journalism plays in the service of the truth.' * Barometern * 'Reading Johan Anderberg's book is not just a way to get perspective and background, detailed descriptions of how the Swedish strategy was formed and what it led to. It is also a way to be released from the debate, both in social and other media. It is extremely cooling. The Herd is no debate book; it is a nuanced report from an incredibly strange time. So strange you need help finding the words to talk about it.' * Aftonbladet * 'Journalist Johan Anderberg makes a brave effort to tell the story about how Sweden chose its path through the pandemic ... Anderberg's narrative has an effortless ease that manifests itself once the writer has a clear overview, and truly masters his subject without getting sidetracked and stuck on details.' * Sydsvenskan * 'Anderberg masters to perfection the societal reportage that closely examines the authorities, effortlessly taking us into the meeting rooms and email inboxes where the Swedish Corona strategy took shape. With efficiency and humour, he visualises his protagonists ... In a climate where media personalities - myself included - often acted as supporters, critics, and hobby epidemiologists, Anderberg has instead buried himself in facts and tried to paint the overall picture ... Questions remain after having finished reading The Herd, but this in no way takes away the honour of having accomplished this impressive pioneering work with such energy and wit from Johan Anderberg. The Herd is sure to greatly impact the debate that we've only seen the nascent beginnings of so far.' * Expressen * 'When the world went into lockdown, Sweden went its own way, and this is the fascinating inside story - superb long journalism.' * The Sydney Morning Herald * 'A gripping analysis of the Swedish response, which examines how tensions between science, policy and politics heightened as the virus held on. If any book were capable of turning scientific debate into a thriller, this one does so; and for the armchair experts on COVID-19 that many of us have become, it is a must-read.' -- Frieda Klotz * Sunday Independent * '[C]onvincing debut from Swedish journalist Anderberg ... Anderberg's account is peppered with details that add depth to the colourful cast ... This is a fascinating addition to the growing body of work on COVID-19.' * Publishers Weekly *

Johan Anderberg is a Swedish journalist and writer who has been a regular contributor to a number of Swedish and international media outlets, including the Wall Street Journal. His upcoming book The Herd, which chronicles the Swedish strategy to battle COVID-19, will be published in Sweden by Albert Bonniers Foerlag in the spring of 2021, and in the US, the UK, and Australia and New Zealand by Scribe in 2022. Alice E. Olsson is a literary translator, writer, and editor working across Swedish and English. She has served as the Cultural Affairs Adviser at the Embassy of Sweden in London and is the recipient of a fellowship as well as multiple grants from the Swedish Arts Council. In 2020, she was shortlisted for the Peirene Stevns Translation Prize. She is currently pursuing a PhD in Comparative Literature at University College London, specialising in literature and human rights.