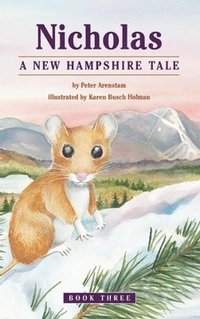 av Peter Arenstam
Häftad Engelska, 2015-10-22
150
Köp
Spara som favorit
Finns även som
Visa alla 1 format & utgåvor
After traveling across his home state of Massachusetts (Book One) and Maine (Book Two), Nicholas learns that his cousin Francis has taken the precious copy of his family journal to New Hampshire. Nicholas knows that he must continue his journey to search for Francis and the journal, but how will one little mouse find them in the vast mountains of New Hampshire? Book Three in a four-book series about Nicholas's adventures in the Northeast.
Visa hela texten

Peter Arenstam was born on a farm in western Massachusetts but grew up on the coast in historic Plymouth. He received a bachelor's degree in philosophy from Bates College in Lewiston, Maine, and apprenticed at the Maine Maritime Museum where he became an instructor and boat builder. Currently, Peter manages the Maritime Artisans at Plimoth Plantation where he oversees the reproduction ship Mayflower II. His writings include numerous magazine articles on nautical history and the children's book Felix and His Mayflower II Adventures. Peter lives near the ocean in Plymouth with his wife Susan and their two daughters, Hannah and Abby. Karen Busch Holman, a BFA graduate of the University of Massachusetts at Amherst, is the illustrator for the Mitt and Minn Midwest Series. Karen's work as an illustrator first appeared in G is for Granite, A New Hampshire Alphabet, and its companion book, Primary Numbers, which solidified her career as an illustrator. She is also the creator of the art that adorns every New Hampshire Heirloom Birth Certificate. More of her work can be seen throughout New Hampshire in support of the Arts Council and in regional magazines and publications. She has actively shared her love of art with many elementary school children throughout New England. Karen now lives in Loveland, Ohio.