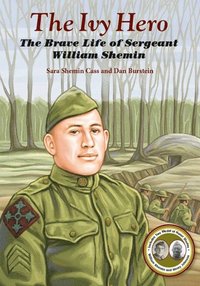 av Sara Shemin Cass, Dan Burstein
E-bok (EPUB - DRM), Engelska, 2022-10-25
200
Ladda ned
Spara som favorit
Ladda ned och läs i en e-boksläsare. Tips på appar
The Ivy Hero is the true story of Sergeant William (Bill) Shemin, child of immigrants, an American soldier who fought in World War I. Dedicated, fearless, and brave, he was awarded the Congressional Medal of Honor posthumously in 2015 by President Barack Obama.Why The Ivy Hero? Sergeant Shemin fought with the U.S. Army's 4th Division, which is known as the ';Ivy' Division because the Roman Numeral for 4 is composed of an I before a VIVso its nickname is ';IVY.' The Ivy Division's motto, mirroring the way the ivy plant itself grows, is ';steadfast and loyal.' After serving in World War I in the Ivy Division, Bill Shemin used the ivy plant as the logo for his tree and plant business. And ';steadfast and loyal' was how he lived his life. He passed along his values of patriotism, education, close family ties, and hard work to three children and 14 grandchildren. Long after his service in the Army was over, Bill's daughter, Elsie Shemin-Roth, waged her own battle for many years to have the U.S. government award him the Medal of Honor that rightfully should have been awarded at the time of his service in World War I. The book also features Henry Johnson, an African American soldier who, like Bill, fought bravely and heroically in World War Inot far away from the battlefields where Bill fought in France in 1918. Like Bill, Henry Johnson's bravery in saving his fellow soldiers' lives went unrecognized with a Medal of Honor in his lifetime, even though his actions certainly called for one. William Shemin was discriminated against because he was a Jewish American, and there was a pronounced mood of anti-Semitism in the United States in 1918. Henry Johnson was discriminated against because he was African American at a time when African Americans were severely discriminated against in the U.S. Army and throughout American life. Both Bill Shemin and Henry Johnson were awarded posthumous Medals of Honor by President Obama, due in no small measure to the efforts of their family members. Although much progress has been made, racial and religious discrimination have been with American society from the birth of our country to the present day. The struggle for equality and freedom continues, as people try to make the United States a ';more perfect union.' The pain and suffering of war and discrimination run through this story, but it has a hopeful ending. And much can be learned from the lives and experiences of these heroes!
Visa hela texten