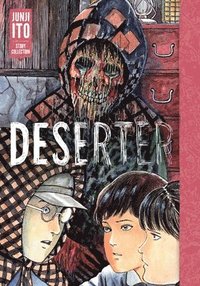 av Junji Ito
(2 röster)  |  Läs 1 recension
Inbunden Engelska, 2022-02-03
244
Köp
Spara som favorit
Kan levereras innan julafton!
An ever-increasing malice. A mind-numbing terror. The seeds of horror are sown in this collection of Junji Ito's earliest works. A vengeful family hides an army deserter for eight years after the end of World War II, cocooning him in a false reality where the war never ended. A pair of girls look alike, but they're not twins. And a boy's nightmare threatens to spill out into the real world... This hauntingly strange story collection showcases a dozen of Junji Ito's earliest works from when he burst onto the horror scene, sowing fresh seeds of terror.
Visa hela texten

Junji Ito made his professional manga debut in 1987 and since then has gone on to be recognized as one of the greatest contemporary artists working in the horror genre. His titles include Tomie and Uzumaki, which have been adapted into live-action films; Gyo, which was adapted into an animated film; and his books Fragments of Horror, Frankenstein, Lovesickness, No Longer Human, Remina, Shiver, Smashed, and Venus in the Blind Spot, all of which are available from VIZ Media. Ito's influences include classic horror manga artists Kazuo Umezz and Hideshi Hino, as well as authors Yasutaka Tsutsui and H.P. Lovecraft. He is a three-time Eisner Award winner. In 2019 his collection Frankenstein won in the "Best Adaptation from Another Medium" category, and in 2021 he was awarded "Best Writer/Artist," while Remina received the award for "Best U.S. Edition of International Material (Asia)."