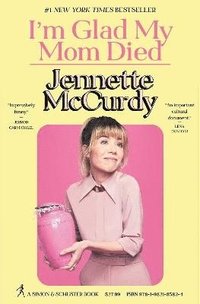 av Jennette McCurdy
Inbunden Engelska, 2022-09-15
254
Köp
Spara som favorit
Kan levereras innan julafton!
Finns även som
Visa alla 2 format & utgåvor
A heartbreaking and hilarious memoir by iCarly and Sam & Cat star Jennette McCurdy about her struggles as a former child actor-including eating disorders, addiction, and a complicated relationship with her overbearing mother-and how she retook control of her life. Jennette McCurdy was six years old when she had her first acting audition. Her mother's dream was for her only daughter to become a star, and Jennette would do anything to make her mother happy. So she went along with what Mom called "calorie restriction," eating little and weighing herself five times a day. She endured extensive at-home makeovers while Mom chided, "Your eyelashes are invisible, okay? You think Dakota Fanning doesn't tint hers?" She was even showered by Mom until age sixteen while sharing her diaries, email, and all her income. In I'm Glad My Mom Died, Jennette recounts all this in unflinching detail-just as she chronicles what happens when the dream finally comes true. Cast in a new Nickelodeon series called iCarly, she is thrust into fame. Though Mom is ecstatic, emailing fan club moderators and getting on a first-name basis with the paparazzi ("Hi Gale!"), Jennette is riddled with anxiety, shame, and self-loathing, which manifest into eating disorders, addiction, and a series of unhealthy relationships. These issues only get worse when, soon after taking the lead in the iCarly spinoff Sam & Cat alongside Ariana Grande, her mother dies of cancer. Finally, after discovering therapy and quitting acting, Jennette embarks on recovery and decides for the first time in her life what she really wants. Told with refreshing candor and dark humor, I'm Glad My Mom Died is an inspiring story of resilience, independence, and the joy of shampooing your own hair.
Visa hela texten

"[A] layered account of a woman reckoning with love and violence at once...[Not] a flippant expose of childhood stardom, nor an angry diatribe directed at an abuser. This complexity is what makes I'm Glad My Mom Died feel real...Some supposed literary types will think the immense popularity of I'm Glad My Mom Died-the hardcover initially sold out at many major bookstores-is merely the result of McCurdy's former stardom and modern culture's thirst for a sensational take. With its bold headline and bright cover featuring a smirking McCurdy holding a pink urn, the book feels deliberately marketed for virality, perfect for sharing on the internet and catching the eye of bookstore browsers. I've mentioned the title of this memoir to some people who have dismissed it out of hand, remarking that being glad one's parent is dead is crude and a sentiment that should be kept to oneself. But those people haven't read the book. McCurdy takes her time to remember difficult and complex moments of her life, staying true to her younger self while ultimately trying to come to terms with who she is as an independent adult. It's a triumph of the confessional genre."-Nina Li Coomes, The Atlantic "Not many people rise to her level of fame or are so deeply abused, but McCurdy's narrative will feel familiar to anyone who has navigated poverty and trauma. Taking advantage of the store discount at your dad's retail job, tuning out screaming matches between parents, avoiding calls from debt collectors ... this is what childhood is like for millions of Americans. Like many, I recognized myself in her words."-Sabrina Cartan, Slate "Unflinching...This year's most candid book...I'm Glad My Mom Died made me laugh; it made me cry. It's such a funny, dark, moving, honest, real, uncensored book, and it's unlike anything I've ever read."-Mary Elizabeth Williams, Salon "[The] number-one New York Times-bestselling memoir that has also achieved pop-cultural phenomenon status...I'm Glad My Mom Died is more than source material for a deluge of headlines about Grande and the slimy advances of a Nickelodeon svengali McCurdy calls simply 'The Creator.' McCurdy distinguishes herself from standard-issue celebrity memoir fare with a vivid, biting, darkly comic tone and an immersive present tense."-Michelle Ruiz, Vogue "For McCurdy, this book isn't just her writing debut. It's a reckoning with guilt and grief after her mother's premature death. It's healing from multiple eating disorders and processing decades of trauma. It's finally doing what she wants for the first time: not acting. Writing...Healing from trauma looks different for everyone: For McCurdy, writing this memoir symbolized empowerment over her narrative. And understanding that it's OK not to forgive her late mother provided her peace."-Jenna Ryu, USA Today "Judging simply by the shocking title of Jennette McCurdy's debut memoir, I'm Glad My Mom Died, you may think the book is a no-holds-barred, scathing takedown of her mother and everyone else who perpetuated the horrifying upbringing that the former iCarly star endured, but you'd be wrong. McCurdy's book is certainly revealing, describing the abuse she endured from her mother, who pushed her into acting at age 6, then guided her directly into an eating disorder and much worse until her death in 2013. But beyond that, it's a measured, heartbreakingly poignant, and often laugh-out-loud-funny memoir with McCurdy showing more sympathy for her complicated mother than most people could even imagine mustering. However, what is perhaps most important about her memoir, which is smart, well-written, and powerful, is just how much hope and help it will surely provide to those suffering similar abuses right now."-Scott Neumyer, Shondaland "The new memoir from former child star Jennette McCurdy has an attention-grabbing title: I'm Glad My Mom Died. Over the course of the book, McCurdy, who buil

Jennette McCurdy starred in Nickelodeon's hit show iCarly and its spin-off, Sam & Cat, as well as in the Netflix series Between. In 2017, she quit acting and began pursuing writing/directing. Her films have been featured in the Florida Film Festival, the Salute Your Shorts Film Festival, Short of the Week, and elsewhere. Her essays have appeared in HuffPost and The Wall Street Journal. Her one-woman show I'm Glad My Mom Died had two sold-out runs at the Lyric Hyperion Theatre and Hudson Theatre in Los Angeles. She hosts a podcast called Empty Inside, which has topped Apple's charts and features guests speaking about uncomfortable topics. She lives in Los Angeles.