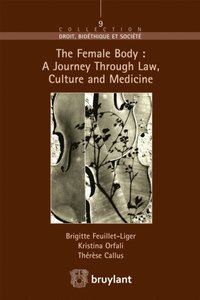 Female Body : A journey through Law, Culture and Medicine E-bok

av Therese Callus, Brigitte Feuillet-Liger, Kristina Orfali
E-bok (EPUB - DRM), Engelska, 2013-12-18
660
Ladda ned
Spara som favorit
Laddas ned direkt
Läs i vår app för iPhone och iPad
Finns även som
Visa alla 1 format & utgåvor
Object of fascination and fantasy, the female body can be idealized, reified or shrouded. ?It is we who make women what they are worth and that is why they are worthless?, proclaimed Mirabeau in the days of the Enlightenment, to which Aragon later replied: ?Woman is the future of Man?. The ambiguities of the female body are therein exposed.This work examines the relationship between the female body and biomedicine. Many possibilities are offered to women through biomedical techniques: from assistance to procreate (with assisted reproduction) to refusal to do so (contraception, voluntary sterilization, termination of pregnancy); to be informed of genetic predispositions (through the use of available genetic tests); or to improve their physical appearance with cosmetic surgery. But a recurrent question arises: with its rapid progress and its extreme medicalization of the body, can biomedicine liberate women? Or rather, given the risks of the commodification of the body or its parts, is it not a source of exploitation ?The authors of this work, jurists, anthropologists, philosophers, sociologists and doctors, have explored these questions. The contributions from nineteen countries in this international multidisciplinary study analyse the reality of the amazing developments of biomedicine on the female body. Numerous systems are compared for the first time; European, African, North and South American, but also Chinese and Japanese. Beyond highlighting differences, and identifying similarities in the development of ?enhancement medicine?, the objective of this work is ultimately to show the complexity surrounding the question of a woman?s freedom over her body and the extent to which this is limited by the State.
Visa hela texten