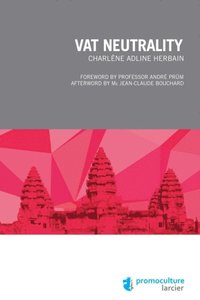 av Charlene Adline Herbain, Andre Prum, Jean-Claude Bouchard
E-bok (EPUB - DRM), Engelska, 2015-05-04
659
Ladda ned
Spara som favorit
Laddas ned direkt
Läs i vår app för iPhone, iPad och Android
Finns även som
Visa alla 1 format & utgåvor
Most major economies use a value added tax (VAT) which is a derivation of the French 1954 taxe sur la valeur ajoutée. The initial imposition of VAT in France and its spread around the world have been driven by economic reasons. This book focuses on one of these economic triggers: the neutrality of VAT as regards the functioning of the economy. It demonstrates that the reason VAT was chosen in France and why thereafter it spread around the world was because it offered the possibility to collect governmental revenue while allowing the economic forces of the market to interplay without being adversely affected.The prerequisite conditions for the existence of VAT neutrality are therefore identified herein along with an overview of the VAT mechanism, demonstrating that the concept of neutrality is built into the VAT system in a manner that allows for the preservation of the natural functioning of the market. After the definition of VAT neutrality is set forth, the elements that comprise VAT neutrality are tested against the realities on the ground and the issues that infringe the neutrality of VAT are identified and analysed. In conclusion, remedies for these issues are being sought by a review of the causes of infringement of VAT neutrality in the perspective of selected proposals for modified VAT systems. These proposals include redesignating the place where VAT is levied and improving VAT collection. Ultimately, the proposed solution has recourse to the roots of VAT together with the most advanced technological tools available to give back to VAT the power to levy revenue while letting the economic forces of the market interplay without instigating any adverse influence.
Visa hela texten