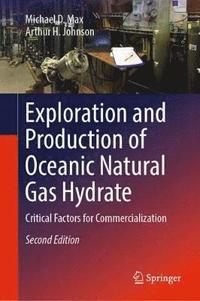 av Michael D Max, Arthur H Johnson
Inbunden Engelska, 2018-11-03
2219
Köp
Spara som favorit
Finns även som
Visa alla 3 format & utgåvor
This second edition provides extensive information on the attributes of the Natural Gas Hydrate (NGH) system, highlighting opportunities for the innovative use and modification of existing technologies, as well as new approaches and technologies that have the potential to dramatically lower the cost of NGH exploration and production. Above all, the book compares the physical, environmental, and commercial aspects of the NGH system with those of other gas resources. It subsequently argues and demonstrates that natural gas can provide the least expensive energy during the transition to, and possibly within, a renewable energy future, and that NGH poses the lowest environmental risk of all gas resources. Intended as a non-mathematical, descriptive text that should be understandable to non-specialists as well as to engineers concerned with the physical characteristics of NGH reservoirs and their production, the book is written for readers at the university graduate level. It offers a valuable reference guide for environmentalists and the energy community, and includes discussions that will be of great interest to energy industry professionals, legislators, administrators, regulators, and all those concerned with energy options and their respective advantages and disadvantages.
Visa hela texten

"The book is noteworthy for its complete coverage of each step in the process ... . The chapters are written as standalone research papers, with abstracts and extensive reference lists, but the book reads smoothly as a whole. ... the book is practically a how-to manual. ... With no other publication presenting close to this level of detail on the subject, the book stands alone as the definitive reference. The book is adequately, though not extravagantly, illustrated with figures." (Seth S. Haines, The Leading Edge, Vol. 39 (10), October, 2020)

Michael D. Max has a broad background including geology, geophysics, chemistry, acoustics, and information technology. He has a BSc from the University of Wisconsin, Madison, an MSc from the University of Wyoming, and a PhD from Trinity College, Dublin, Ireland. He has worked as a geologist / geophysicist for the Geological Survey of Ireland, the Naval Research Laboratory, Washington, DC, and the NATO Undersea Research Center, La Spezia, Italy. From 1999 to 2011 Max was CEO and Head of Research for Marine Desalination Systems LLC, which established a hydrate research laboratory and explored industrial applications of gas hydrate. He is the author of many scientific publications and four textbooks, and holds over 40 patents. He assisted in the writing of the US Gas Hydrate Research and Development Act of 2000. Michael is a member of the Methane Hydrate Advisory Committee of the Department of Energy 2014-2019, and is Co-Chair, Diving Committee of the Marine Technology Society. He is an Adjunct Professor at the School of Geological Sciences of University College, Dublin, Ireland. HEI has been closed. Michael is now carrying on his R&D activities through Max Systems LLC and University College, Dublin, Ireland. Art Johnson was a founding partner of Hydrate Energy International, LLC (HEI). Prior to forming HEI in 2002, Art had been a geologist with Chevron for 25 years, where his career included most aspects of hydrocarbon exploration and development. Art was instrumental in initiating Chevron's Gulf of Mexico program for gas hydrate studies in 1995. He advised Congress and the White House on energy issues starting in 1997, and chaired advisory committees for several Secretaries on Energy. He had a longstanding role coordinating the research efforts of industry, universities, and government agencies. Art served as the Gas Hydrate Lead Analyst for the "Global Energy Assessment," an international project undertaken by the International Institute for Applied Systems Analysis (IIASA) of Vienna, Austria and supported by the World Bank, UN organizations, and national governments that evaluated the energy resource bases of the entire planet with a view to addressing energy needs in the decades to come. He was Chair of the Gas Hydrate Committee of the Energy Minerals Division of the American Association of Petroleum Geologists (AAPG) and was also very active in his Methodist Church and in helping with hurricane relief and peacemaking activities. Much to the sorrow of his good friend and co-author, and of countless other friends, Art unexpectedly passed away on August 9, 2017.