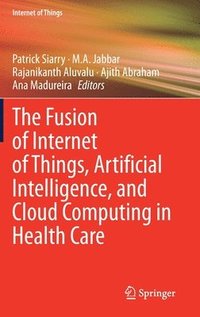 The Fusion of Internet of Things, Artificial Intelligence, and Cloud Computing in Health Care

av Patrick Siarry, M A Jabbar, Rajanikanth Aluvalu, Ajith Abraham, Ana Madureira
Inbunden Engelska, 2021-08-12
1771
Köp
Spara som favorit
Kan tyvärr inte levereras innan julafton.
Finns även som
Visa alla 2 format & utgåvor
This book reviews the convergence technologies like cloud computing, artificial intelligence (AI) and Internet of Things (IoT) in healthcare and how they can help all stakeholders in the healthcare sector. The book is a proficient guide on the relationship between AI, IoT and healthcare and gives examples into how IoT is changing all aspects of the healthcare industry. Topics include remote patient monitoring, the telemedicine ecosystem, pattern imaging analytics using AI, disease identification and diagnosis using AI, robotic surgery, prediction of epidemic outbreaks, and more. The contributors include applications and case studies across all areas of computational intelligence in healthcare data. The authors also include workflow in IoT-enabled healthcare technologies and explore privacy and security issues in healthcare-based IoT.
Visa hela texten

Patrick Siarry is a Professor of Automatics and Informatics at the University of Paris-Est Creteil, where he leads the Image and Signal Processing team in the Laboratoire Images, Signaux et SystemesIntelligents (LiSSi). He has considerable teaching, research and writing experience in the areas of signal processing, control, artificial intelligence, operations research, and optimization. He presently serves as an Associate Editor of the journal Information Sciences and the journal Engineering Applications of Artificial Intelligence. Dr. MA.Jabbar is a Professor at the Computer Science and Engineering Department, Vardhaman College of Engineering, Hyderabad, Telangana, India. Jawaharlal Nehru Technological University, Hyderabad awarded him a doctoral degree for his work in Data Mining, a specialization of Computer Science. He has been teaching for 17 years at various places in and around Telangana. He has a lifetime membership in technical bodies like the Indian Science Congress Association and the Computer Society of India. He is a senior member of IEEE (International) and and the Asia Pacific Institute of Science and Engineering(APISE) and also took onto his shoulders the responsibility of being the secretary of the IEEE Computer Society (Hyderabad). He has published more than 30 international papers in various journals and has read his papers at various conferences. He is a reviewer for many technical journal publishing and distributing organizations like Springer, Elsevier, and IEEE Transactions on Systems Man and Cybernetics, Wiley, Sci Indexed journals. He has served as a technical committee member for more than 20 international conferences. His research interests include various areas of Computer Science like Data Mining, Big Data Analytics, Bio Informatics, Cyber Security, Machine Learning, Attack Graphs, and Intrusion Detection Systems. He obtained his Doctor of Philosophy (Ph.D.) and Master of Technology (M.Tech.) in Computer Science and Engineering from JNTU, Hyderabad, Telangana in the years 2015 and 2006 respectively. Dr. RajaniKanth Aluvalu , Professor & HoD, Dept of CSE, Vardhaman College of Engineering, Hyderabad, PhD: From GITAM University, Hyderabad in Computer science Engineering with Cloud Computing as major . Received "Distinguished Faculty Fellow award" from IUCEE during ICTIEE-2018 at Bennett University Greater Noida.Received "Bronze level Partnership as appreciation for the year 2013, 2014 and 2015 from Infosys Campus connect. He published 4 Patents and his google scholar profile https://scholar.google.co.in/citations?hl=en&user=rHQkh6MAAAAJ Ajith Abraham (Senior Member, IEEE) received the M.Sc. degree from Nanyang Technological University, Singapore, in 1998, and the Ph.D. degree in computer science from Monash University, Melbourne, Australia, in 2001. He is currently the Director of Machine Intelligence Research Labs (MIR Labs), a Not-for-Profit Scientific Network for Innovation and Research Excellence connecting Industry and Academia. The Network with Headquarters in Seattle, USA, he has currently more than 1000 scientific members from more than 100 countries. As an Investigator/Co-Investigator, he received research grants worth more than 100 Million U.S.$ from Australia, USA, EU, Italy, Czech Republic, France, Malaysia, and China. He works in a multidisciplinary environment involving machine intelligence, cyber-physical systems, the Internet of Things, network security, sensor networks, web intelligence, web services, data mining, and applied to various real world problems. In these areas, he has authored or coauthored more than 1300 research publications out of which there are more than 100 books covering various aspects of computer science. One of his books was translated to Japanese and few other articles were translated to Russian and Chinese. About more than 1000 publications are indexed by Scopus and more than 800 are indexed by Thomson ISI Web of Science.