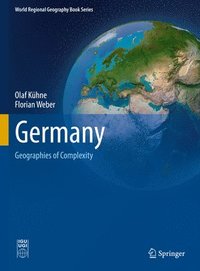 av Olaf Kuhne, Florian Weber
Inbunden Engelska, 2022-03-03
1101
Köp
Spara som favorit
Finns även som
Visa alla 1 format & utgåvor
This book addresses the highly differentiated spatial, social, cultural and demographic structure(s) of Germany, with a particular focus on the reciprocal relations between different levels of spatial development. The historical development of Germany serves as a background in order to provide context for the development of spatially relevant ideas and ideals (whether in relation to politics, landscape, or culture). In this regard, questions of divergence and convergence become highly salient. The book makes the complexity of spatial and social developments in Germany comprehensible. The neopragmatic approach adopted here allows bringing together different theoretical strands while providing a basis for independent regional geographic research at the same time. Beginning with an overview of the physical structures of Germany which provides the material point of departure for the societal development of Germany, key aspects of the German history are discussed. Particular attention is paid to the reciprocal influence between material substrate and notions of landscape. Here, specific 'German' trajectories of aesthetic and normative conceptions of landscape become clear. A common theme throughout the book are questions of divergence and of efforts towards convergence, which become evident when considering past and present economic, political, and demographic developments. Efforts to tackle current challenges, such as adapting to climate change and mitigating it, or securing raw materials, also become apparent. The complexity of spatial processes in Germany is illustrated in case study regions dealing with the challenges of structural change in traditional industrial regions (such as the Ruhr area), or e.g. efforts of Berlin to position and find itself as the capital of a unified Germany. Overall, the book shows how theory-driven regional geographic research can make spatiotemporal complexities tangible and comprehensible.
Visa hela texten

Olaf Kuhne studied geography, modern history, economics and geology at Saarland University and received his doctorate in geography and sociology there and at the Open University of Hagen. After working in various Saarland state authorities and at Saarland University, he was Professor of Rural Development/Regional Management at Weihenstephan-Triesdorf University of Applied Sciences from 2013 to autumn 2016 and Associate Professor of Geography at Saarland University in Saarbrucken. Since autumn 2016, he has been a professor in the Department of Geography at the Chair of Urban and Regional Development at the Eberhard Karls University of Tubingen. His research interests include landscape and discourse theory, social acceptance of landscape change, sustainable development, transformation processes in Southern California and the Southern States of the USA, regional development, and urban and landscape ecology. Florian Weber studied geography, business administration, sociology and journalism at the University of Mainz and gained his doctorate at the University of Erlangen-Nuremberg with a thesis comparing German and French area-based politics in light of discourse theory. After working from 2012-2013 as a project manager in Wurzburg, he took up an appointment as researcher and project coordinator in the transregional university cooperation UniGR at Kaiserslautern University of Technology and after that Weihenstephan-Triesdorf University of Applied Sciences. Since October 2016 he has been Associate Professor (Akademischer Rat) at the University of Tubingen, where he completed his post-doctoral degree (Habilitation) in 2018. In April 2019 he was appointed Junior Professor of European Studies at Saarland University, with special reference to Western Europe and border regions. His research focuses on discourse and landscape, renewable energies, cross-border cooperations, and comparative international urban district politics and development.