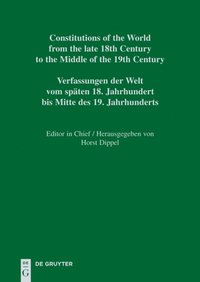 av Antonio Barbas Homem, Jorge Silva Santos, Clara Alvarez Alonso
E-bok (PDF - DRM), Spanska, 2010-11-29
2879
Ladda ned
Spara som favorit
Laddas ned direkt
Läs i vår app för iPhone, iPad och Android
The book edition of Constitutions of the World from the late 18th Century to the middle of the 19th Century is the most complete and academically thorough collection of its kind. It contains constitutional documents from all over the world, written from 1776 to the end of the year 1849. This collection includes about 1,600 constitutions, amendments, human rights declarations, and draughts of constitutions that never came into force, from this period. These early constitutional documents were collected and examined in archives and libraries all over the world, as part of a project by the Deutsche Forschungsgemeinschaft (German Research Foundation). Using the original documents, experts from American and European universities reconstructed the authentic constitution texts for each country, and annotated them in their respective original languages. Each volume contains a short introduction, a main part with the edited constitution documents of a country, comments and an index. The unique value of the complete edition lies in its making all constitutions, from the early phase of modern constitutionalism, accessible in a reliable, authentic text version for the first time. These constitutions were widely scattered until now and, in many cases, unknown. In all, constitutional documents from about 50 countries in Europe and the Americas will be published in volumes for each country. Constitutions of the World from the late 18th Century to the Middle of the 19th Century is a unique and fundamental source edition and an extensive documentation of constitutional history. At the same time, it supplements the microfiche edition Constitutions of the World 1850 to the Present. The editor, Horst Dippel, is Professor of British and North American History at the University of Kassel, Germany.
Visa hela texten