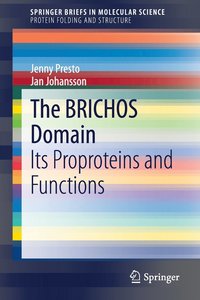 av Jenny Presto, Jan Johansson
Häftad Engelska, 2015-04-17
723
Köp
Spara som favorit
Finns även som
Visa alla 1 format & utgåvor
This Brief summarizes the current research on the novel BRICHOS domain, which is a chaperone domain found in a variety of proteins and is shown to exhibit anti-amyloidogenic chaperone-like functions. The BRICHOS domain is defined from sequence similarities, lacks established physiological function(s) and is found about 10 distantly related pro-protein families, several of which are associated with human disease. In this work, the authors review the mechanism by which BRICHOS inhibits A aggregation and examine recent results from in vivo experiments where BRICHOS inhibits A aggregation and toxicity in Drosophila melanogaster. BRICHOS is one of natures (more specific) ways to protect against fibril formation, and exploring the potential of using the BRICHOS domain in the fight against Alzeimer's Disease and other amyloid diseases seems highly relevant. This brief is useful for newcomers to this field or researchers in related fields wishing to gain a quick overview of the latest findings.
Visa hela texten

Jenny Presto obtained her PhD in Medical Biochemistry from Uppsala University in 2006, where she studied the biosynthesis of heparan sulfate. She did a postdoc at the Swedish University of Agricultural Sciences (SLU) in Uppsala, Sweden, studying the function of the BRICHOS domain as a chaperone for surfactant protein C. In 2011, Jenny moved to Karolinska Institutet, Center for Alzheimer Research, Stockholm, Sweden, where she currently is assistant professor. Her research focuses on the in vitro and in vivo inhibition of amyloid-b fibril formation and toxicity by the chaperone BRICHOS. Jan Johansson obtained his MD from Karolinska Institutet in 1990, and got a PhD from Karolinska Institutet 1991. He spent a post-doc with Kurt Wuthrich at the ETH in Zurich during 1992 and 1993, which resulted on the first structure determination of a lung surfactant protein. He is currently professor of Biological Dementia Research at Karolinska Institutet and of Medical Biochemistry at the Swedish University of Agricultural Sciences (SLU), Uppsala, Sweden. Johansson's research has generated synthetic proteins for treatment of respiratory distress and has led to identification of fundamental properties of amyloidogenic proteins, defined a novel type of chaperone defense involved in amyloid diseases and revealed pathways to control protein assembly in spider silk formation.

Introduction to BRICHOS Superfamily.- BRICHOS in proSP-C.- Proteins with a BRICHOS Domain.- A Amyloid Formation in Alzheimer's disease.- In vivo Effect of BRICHOS on A Aggregation and Toxicity.