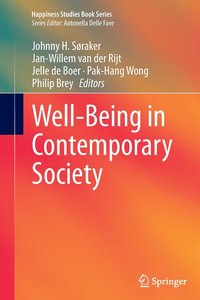 av Johnny H Soraker, Jan-Willem Van Der Rijt, Jelle De Boer, Pak-Hang Wong, Philip Brey
Häftad Engelska, 2016-09-22
1359
Köp
Spara som favorit
Finns även som
Visa alla 2 format & utgåvor
This anthology examines the practical role of well-being in contemporary society. It discusses developments such as globalization, consumerism and the rapid innovation and use of new and emerging technologies and focuses on the significant impact of these developments on the well-being of people living today. The anthology brings together researchers from various disciplines, including psychology, economics, sociology, philosophy and development studies. It provides concrete insight on the role and importance of well-being in contemporary society, using a mix of empirical grounding, philosophical rigour and an emphasis on real-world applications. It is unique in that it seeks to understand the relation between well-being research and its application towards real problems.
Visa hela texten

Dr. Johnny Hartz Soraker is Assistant Professor of Philosophy of technology at the Department of Philosophy, University of Twente. He defended his PhD cum laude at the same department, supervised by Prof. Dr. Philip Brey. The dissertation mainly dealt with the epistemology, ontology and ethics of virtual worlds, with a particular focus on their potential impact on personal well-being. Soraker's main research interests and publications lie in the intersections between Information Technology, on the one hand and both theoretical and practical philosophy, on the other. He often grounds his work in psychological research, especially work in the field of Positive Psychology and is developing this toward a comprehensive methodology entitled "Prudential-Empirical Ethics of Technology (PEET) . Jan-Willem van der Rijt is Lecturer in Political Philosophy at the Department of Philosophy of the University of Bayreuth. His work addresses issues related to the topics of freedom, happiness and dignity, and has appeared in journals such as Economics and Philosophy, Law and Philosophy, Ethical Theory and Moral Practice, and Theory and Decision. Van der Rijt is author of The Importance of Assent: A Theory of Coercion and Dignity (Springer 2012). Jelle de Boer is a lecturer in philosophy at Delft University of Technology. His interests are in philosophy of social science, ethics and social theory. His recent topics of research concerned game theory and well-being. He has recently published in Philosopical Psychology, Biology and Philosophy, and Economics and Philosophy. Pak-Hang Wong is a Research Fellow on Climate Geoengineering Governance at the Institute for Science, Innovation and Society (InSIS) and Oxford Uehiro Centre for Practical Ethics, University of Oxford. He works primarily on philosophy and ethics of technology, but he is also interested in climate ethics, social theory, digital media studies, and science and technology studies. Philip Brey is professor of philosophy within the department of philosophy of the University of Twente. He has published extensively in the areas of well-being and technology, ethics of technology, and philosophy of information technology. He is co-editor of Brey, P, Briggle, A. and Spence, D. (eds.), The Good Life in a Technological Age (Routledge, 2012), which covers philosophical, psychological and economic approaches to well-being and technology.