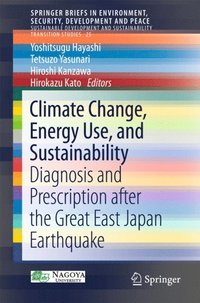 Diagnosis and Prescription after the Great East Japan Earthquake

av Yoshitsugu Hayashi, Tetsuzo Yasunari, Hiroshi Kanzawa, Hirokazu Kato
E-bok (PDF - DRM), Engelska, 2016-07-08
754
Ladda ned
Spara som favorit
Laddas ned direkt
Läs i vår app för iPhone och iPad
This book is an outcome of the symposium &quoteTowards Earth Friendly Use of Resources and Energy,&quote organized by the Nagoya University Center of Excellence Program &quoteFrom Earth System Science to Basic and Clinical Environmental Studies&quote and presents papers by four eminent researchers. 1) Syukuro Manabe, who was honored in 2008 by the Earth Hall of Fame Kyoto, together with Ms. Maathai and Ms. Brundtland, describes the mechanisms of extreme weather, drought, and flood that were caused by climate change due to CO2 emissions. 2) Ernst Ulrich von Weizsacker, co-chair of the Club of Rome, describes &quoteFactor 4 and 5&quote concepts such as technological progress and redesigning socioeconomic systems, e.g. taxation, and stresses the importance of humanity. 3) Hans-Peter Durr, ex-president of the Max Planck Physics Institute as a successor of Heisenberg, explains the mechanism of a living Earth sustained by accumulated energy resources provided by the sun. He clarifies a point on preserving the dynamic stability of minerals and life on Earth. 4) Shohei Yonemoto, a well-known political scientist focusing on sustainability, explains environmental politics and why the IPCC and UNFCCC framework were established based on precaution principles. He puts forward a new concept called futurology, which considers population and food problems from a Malthusian standpoint and incorporates them into issues such as climate change and natural disasters. This book is written and based on a very simple but concrete idea and provides the readers with a chance to consider the shape of future Earth.
Visa hela texten