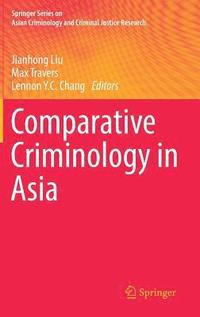 av Jianhong Liu, Max Travers, Lennon Y C Chang
Inbunden Engelska, 2017-07-27
1349
Köp
Spara som favorit
Finns även som
Visa alla 2 format & utgåvor
This edited volume presents the diversity of comparative criminology research in Asia, and the complex theoretical and methodological issues involved in conducting comparative research. With contributors both from the West and the East exploring these questions, the Editors have created a balanced resource, as well as set an agenda for future research. The increasing pace of globalization means that researchers should be armed with an understanding of how criminal justice systems work across the world. In the past, comparative research largely compared Western countries to each other, or involve d researchers from a Western perspective examining an Asian country, with models and theories developed in the West considered to have universal applications. This work aims to correct that gap, by providing a critical examination of comparative research, presenting quantitative and qualitative research data, and asking new questions that challenge prevailing research norms and provide an agenda for future research. This work will be of interest for researchers across the field of Criminology, particularly those with an interest in International and Comparative Research, research on or about Asia, and related disciplines such as Sociology, Demography, and Social Policy. "This fine collection that goes to the rich distinctiveness of Asian criminology. The editors have brought together a wonderful collection of authors mainly from the region. The distinctiveness of values and relational practices in Asia are recurrent themes that are well developed in this book and help us to make sense of patterns of crime and criminal justice in Asia." John Braithwaite, Australian National University "What theoretical, methodological, and practical issues must we confront in conducting cross-cultural studies encompassing Western and Asian countries? Comparative Criminology in Asia discusses these issues and presents exemplary comparative research. The introductory chapter and the introduction to each part by the co-editors are lucid and highly educational. This collection must be required reading for every serious scholar and aspiring graduate student in Asian countries so that criminological and criminal justice studies will be brought to a much higher level o f sophistication." Setsuo Miyazawa, UC Hastings "Can there be - and should there be -- a distinctive Asian criminology? What would this involve? The answer depends on what one thinks of the universalistic explanatory claims of Western criminology. Will these claims become self- fulfilling as these societies add to colonial influences a more deliberate borrowing of criminal justice models and established ways of pursuing discipline of criminology? Or will a more critical spirit prevail? This welcome edited collection by Liu, Travers and Chang provides an excellent starting point for reflecting on these and other questions. Rather than attempting to provide descriptions of the variety of similarities and differences in this region (though there are some fascinating case studies of these) the focus is even more on exploring the theoretical approa ches and methodologies used in comparing institutional and cultural differences by Asian criminologists and others." David Nelken, King's College, London "Criminologists can no longer ignore the impact of globalization on the pattern and amount of crime as we experienced recently, nor can we ignore the global change of criminal justice policies to deal with crime. There is, therefore, a desperate need to collect data on how crime and criminal justice are influenced by globalization across Asian countries. On the other hand, there are debates on the issue of culture-specific vs. pan-culture theories of crime. This collection addresses both issues in an interesting way. Its publication is timely and welcome." Chuen-Jim Sheu, National Taipei University
Visa hela texten

Professor Jianhong Liu is a Professor at University of Macau. He is the winner of 2016 American Society of Criminology's "Freda Adler Distinguished Scholar Award". Prof Liu is the author, editor-in-chief, or co-editor of about 30 books. He has published 100 papers including journal articles and book chapters. He is currently the elected President of the Scientific Commission of the International Society for Criminology (since 2014), the chairman of the General Assembly of the Asian Criminological Society (2016-), and a member of the steering committee of Campbell Collaboration's Crime and Justice Group (since 2009). Professor Liu was the Founding President of Asian Criminological Society (from 2009 to 2015). He is also the editor-in-chief of the Asian Journal of Criminology< (Springer Publishing), the editor of "Springer Series on Asian Criminology & Criminal Justice Research", and a member of the editorial boards of more than 20 international academic jou rnals, including British Journal of Criminology. Max Travers is a senior lecturer in the School of Social Sciences at the University of Tasmania. Max qualified as a solicitor in the United Kingdom in 1988, before completing a PhD in sociology at the University of Manchester. He lectured in sociology and criminology at the University of Plymouth, and Buckinghamshire New University, before moving to the University of Tasmania in 2003. His doctoral research, published as The Reality of Law (1997), was an ethnomethodological investigation into the practical work of defence lawyers. He has published studies about the work of judicial officers in immigration appeals tribunals and children's courts, and is currently researching bail decision making. He has written textbooks on qualitative research methods and sociology of law, and a monograph about the rise of quality assurance as a new form of regulation. Lennon Y.C. Chang is a lecturer i n Criminology in the School of Social Sciences at Monash University. Dr. Chang is interested in researching crime and governance of cyberspace - cybercrime, cyber terrorism and cyber warfare. He is particularly interested in the regulation and governance of cyberspace in the Asia-Pacific region. His book Cybercrime in the Greater China Region: Regulatory Responses and Crime Prevention (Edward Elgar, 2012) is about the nature and range of responses to cybercrime between China and Taiwan. His professional interest in China continues and he is currently researching on-line vigilantism in China. He was also undertaking research into cybercrime and cyber-deviance among Hong Kong juveniles. Dr. Chang was awarded his PhD by the Australian National University. He has a Masters in Criminology and Bachelor in Law degrees from National Taipei University, Taiwan.