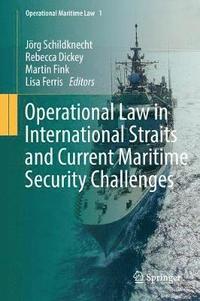 Joerg Schildknecht is a Commander (res.) of the German Navy. He is currently stationed as the Legal Advisor of the NATO Centre of Excellence for Operations in Confined and Shallow Waters (COE CSW) in Kiel, Germany. He is a civil servant of the German Navy and has been deployed in several military missions in his military reserve rank. He has worked for, inter alia, EU NAVFOR Northwood, Murwik Naval Academy, German Fleet Command Flensburg and in the International Law Department of the German Ministry of Defense in Berlin. He is a specialist in international law and holds a doctor iuris at University of Hamburg. Rebecca Dickey is a Lieutenant in the United States Navy. She has served in operational positions on board multiple Naval vessels and as has served internationally as a Legal Advisor at the NATO Centre of Excellence for Operations in Confined and Shallow Waters (COE CSW). Her operational tours include Humanitarian Aid missions to Central and South America as well as deployments to the South China Sea, East China Sea, and Yellow Sea. Martin Fink is a Commander in the Royal Netherlands Navy. He has served in several national and international legal postings as a military legal advisor, amongst which were the Netherlands Maritime Force (NLMARFOR), NATO Joint Force Command Naples and a brief spell at the Netherlands Ministry of Defence. He has been on several operational tours as a legal advisor, among which were Iraq, Afghanistan and South-Sudan. He has been a lecturer of international law at the Netherlands Defence Academy and is a researcher at the University of Amsterdam, at the Amsterdam Centre of International Law (ACIL) and holds a doctor iuris at the same University. Brigadier Lisa Ferris is the Director of New Zealand Defence Legal Services. In 2008, she was deployed to the Arabian Gulf as the Legal Officer aboard the frigate HMNZS TE MANA where she provided legal advice to the Commanding Officer. In late 2009 Brigadier Ferris was deployed to Afghanistan as the legal officer advising the New Zealand senior national officer on rules of engagement, law of armed conflict, and general military law issues. Brigadier Ferris was deployed to Afghanistan again in 2012 as counsel assisting a Court of Inquiry, and to Iraq in 2015 to support the planning for the deployment of NZ force elements. In 2013 she was appointed to as the Deputy Director Operations Law and the Chief of Staff for Defence Legal Services. In 2017 Brigadier Ferris was promoted to Colonel and appointed as the Director of Defence Legal Services. On 23 January 2018 Brigadier Ferris was appointed to her present rank. Brigadier Ferris holds a Master of Laws with Honours and a Bachelor of Commerce and Administration from Victoria University and completed United States Marine Corps Staff College (Extramural) in 2014.