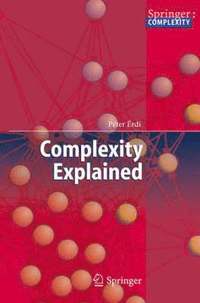 av Peter Erdi
Inbunden Engelska, 2007-10-01
1959
Köp
Spara som favorit
Finns även som
Visa alla 2 format & utgåvor
This book explains why complex systems research is important in understanding the structure, function and dynamics of complex natural and social phenomena. It illuminates how complex collective behavior emerges from the parts of a system, due to the interaction between the system and its environment. Readers will learn the basic concepts and methods of complex system research. The book is not highly technical mathematically, but teaches and uses the basic mathematical notions of dynamical system theory, making the book useful for students of science majors and graduate courses.
Visa hela texten

REVIEW - COMPLEXITY EXPLAINED BY PETER ERDI By Karl Friston FRS, University College London This is a charming and engaging book. It treats the reader with perspectives on complexity from nearly all possible angles. This rounded approach works extremely well and highlights the connections between different formulations of complexity, both in terms of their application and historical development. The book is clearly written by someone who delights in the challenges posed by complexity research and has spent a lot of time teaching in this area. The book is written in an intuitive and accessible way; although there are mathematical expositions, they are not intimidating for the non-mathematical reader. The book is organised in a clear and purposeful way; as if it was based on a mature series of lectures. It stars from the historical fundaments of complexity theory and ends with cutting-edge research into things like evolutionary game theory. The writing style is endearingly idiosyncratic; disclosing the author's Hungarian background. Peter Erdi's ethnic and intellectual roots show themselves through the balanced references to Eastern block and Western contributions, through his Hungarian anecdotes and metaphors, through his syntax and finally through his humour. There are several nice examples of the latter; his preference for the term "player" over "agent" is not left implicit. Sometimes it is difficult to tell whether something has been lost or gained in translation, for example I had assumed that "out of ouch" meant "out of touch". However, the context in which this phrase was used (the resolution of unrequited love) made me think twice. In short, the book had great substance and made me smile a lot. The book is organised into ten chapters; the first three deal with the history of complex systems and theory. I found these chapters very illuminating. They gather together names and concepts that one has come across before and place them in useful relationship to each other. There is lots of fascinating detail about the growth of the ideas considered in later chapters. These chapters are underpinned by some excellent tutorials in relevant basics in the physical and life-sciences (e.g., Hamiltonian dynamics, statistical thermodynamics, chaotic itinerancy and so on). In areas that I am familiar with, I was impressed by the clarity and depth of this background material. This made me take the treatment of other areas equally seriously. The middle part of the book deals with the phenomenology and application domains of complexity theory; ranging from chemical kinetics to the epidemic propagation of infections and ideas. Some of the examples are a prelude to the final chapters that focus on the complexity of the brain and related models of decision making and prediction. There is diversity and coherence in these chapters, for example we move gracefully from stock-market crashes to epileptic seizures, which take us straight back to earlier chapters dealing with single-cell modelling in the brain and neuronal rhythms. As with the historical chapters, the coverage was impressive for its balance and breadth. As someone who has dealt with complex systems in a somewhat piece-meal fashion, I was impressed that nearly every relevant contribution I know about was covered in a brief but useful way. Even in areas I was familiar with, I learned a lot, particularly about the origins of some of the ideas. Most of this was scientific but sometimes it was historical (e.g., the contributions F Ventriglia to mean-field theories of statistical neurodynamics); sometimes it was personal (e.g., learning that, sadly, Esther Thelen had died). I am not sure whether this book 'explains' complexity. It certainly explains the genesis of the complexity sciences with a compelling and useful focus on the history of these ideas and the rhetoric needed to articulate them. This is a very worthwhile read for any st

1 COMPLEX SYSTEMS: THE INTELLECTUAL LANDSCAPE 1.1 The century of complexity? 1.2 Characteristics of simple and complex systems 1.2.1 System and its environment 1.2.2 Simple systems 1.2.3 Complex systems 1.3 Connecting the dots 2 HISTORY of COMPLEX SYSTEMS RESEARCH 2.1 Reductionist success stories versus the importance of organization principles 2.1.1 Reductionism and holism in quantum physics 2.1.2 Reductionism and complexity in molecular biology 2.2 Ancestors of present day complex system research 2.2.1 Systems theory 2.2.2 Cybernetics 2.2.3 Nonlinear science in action: Theory of dissipative structures, synergetics and catastrophe theory 3 FROM THE CLOCKWORK WORLD VIEW to IRREVERSIBILITY (and BACK?) 3.1 Cyclic universe versus linear time concept: the metaphysical perspective 3.1.1 Cyclic Universe 3.1.2 Linear time concepts 3.2 The Newtonian Clockwork Universe 3.2.1 The mechanical clock 3.2.2 Kepler's integral laws 3.2.3 Newton's differential laws, Hamilton equations, conservative oscillation, dissipation 3.3 Mechanics versus Thermodynamics 3.3.1 Heat conduction and irreversibility 3.3.2 Steam engine, feedback control, irreversibility 3.3.3 The first and second laws of thermodynamics 3.4 The birth of the modern theory of dynamical systems 3.5 Oscillations 3.5.1 The Lotka -Volterra Model 3.5.2 Stable oscillation: limit cycles 3.5.3 Quasiperiodic motions: A few words about the modern theory of dynamical systems 3.6 The chaos paradigm: then and now 3.6.1 Defining and detecting chaos 3.6.2 Structural and geometrical conditions of chaos: what is important and what is not? 3.6.3 The necessity of being chaotic 3.6.4 Controlling chaos: why and how? 3.6.5 Traveling to High-dimension land: Chaotic itinerancy 3.7 Direction of evolution 3.7.1 Dollo's law in retrospective 3.7.2 Is something never-decreasing during evolution? 3.8 Cyclic universe: revisited. . . and criticized 4 THE DYNAMIC WORLD VIEW in ACTION 4.1 Causality, teleology and about the scope and limits of the dynamical paradigm 4.1.1 Causal versus teleological description 4.1.2 Causality, networks, emergent novelty 4.2 Chemical kinetics: a prototype of nonlinear science 4.2.1 On the structure - dynamics relationship for chemical reactions 4.2.2 Chemical kinetics as a metalanguage 4.2.3 Spatiotemporal patterns in chemistry and biology 4.3 Systems biology: the half admitted renaissance of cybernetics and systems theory 4.3.1 Life itself 4.3.2 Cells as self-referential systems 4.3.3 The old-new systems biology 4.3.4 Random Boolean networks: model framework and applications for genetic networks 4.4 Population dynamic and epidemic models: biological and social 4.4.1 Connectivity, stability, diversity 4.4.2 The epidemic propagation of infections and ideas 4.4.3 Modeling social epidemics 4.5 Evolutionary dynamics 4.6 Dynamic models of war and love 4.6.1 Lanchaster's combat model and its variations 4.6.2 Is love different from war? 4.7 Social dynamics: some examples 4.7.1 Segregation dynamics 4.7.2 Opinion dynamics 4.8 Nonlinear dynamics in economics: some examples 4.8.1 Business cycles 4.8.2 Controlling chaos in economic models 4.9 Drug market: controlling chaos 5 THE SEARCH FOR LAWS: DEDUCTIVE VERSUS INDUCTIVE 5.