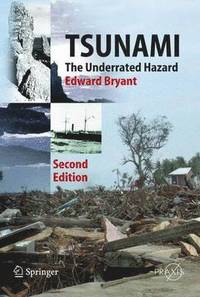 av Edward Bryant
Häftad Engelska, 2010-11-30
2101
Köp
Spara som favorit
Finns även som
Visa alla 4 format & utgåvor
Tsunamis are underrated as major hazards, mainly due to the misconceptions that they occur infrequently and happen along some distant shoreline. However, evidence for past great tsunami has recently been discovered along apparently aseismic and protected coastlines, such as those of Australia and Western Europe. This is a comprehensive and well illustrated textbook on all aspects of tsunami. It can be used by a student or layperson to gain encyclopedic knowledge about tsunami.
Visa hela texten

From the reviews of the second edition: "A much needed, up-to-date introductory work on tsunamis with worldwide coverage. ... Many high-quality maps, figures, charts, and exceptional photographs augment the text; an extensive list of cited references is especially valuable. This book will have noteworthy appeal to students and professionals alike in the fields of geomorphology, coastal engineering, environmental sciences, and economics. It will also be valuable to geographers, civic and emergency planners, and the general public living along coastlines the world over ... . Summing Up: Recommended. All readers/libraries." (T. L. T. Grose, CHOICE, Vol. 46 (01), September, 2008) "The main focus of the book was and remains the formation of landscape features by large tsunami. ... The greatest value of this book may well be to raise awareness in the public and among policy makers ... . the book very accessible to the general public and those who have limited scientific aptitude. ... The book concludes with a discussion of modern tsunami risks and warning systems, followed by an epilogue which presents several plausible scenarios of future tsunami disasters." (Michael Antolik, Pure and Applied Geophysics, Vol. 166, 2009)

Dr Edward Bryant is a renowned and respected tsunami researcher, writer and teacher in the areas of natural hazards and climatology. Tsunami: The Underrated Hazard was first published by Cambridge University Press in 2001. This is now out of print and CUP confirmed that all rights in the book have reverted to the author. The 2nd Edition incorporates the great Indian Ocean tsunami in 2004 and the author focuses on geomorphology and the processes and events linked to the main causes of tsunami, namely, earthquakes, volcanoes, landslides and, in addition, comet and meteorite impacts.