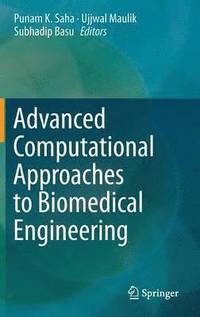 av Punam K Saha, Ujjwal Maulik, Subhadip Basu
Inbunden Engelska, 2014-02-05
1063
Köp
Spara som favorit
Finns även som
Visa alla 2 format & utgåvor
There has been rapid growth in biomedical engineering in recent decades, given advancements in medical imaging and physiological modelling and sensing systems, coupled with immense growth in computational and network technology, analytic approaches, visualization and virtual-reality, man-machine interaction and automation. Biomedical engineering involves applying engineering principles to the medical and biological sciences and it comprises several topics including biomedicine, medical imaging, physiological modelling and sensing, instrumentation, real-time systems, automation and control, signal processing, image reconstruction, processing and analysis, pattern recognition, and biomechanics. It holds great promise for the diagnosis and treatment of complex medical conditions, in particular, as we can now target direct clinical applications, research and development in biomedical engineering is helping us to develop innovative implants and prosthetics, create new medical imaging technologies and improve tools and techniques for the detection, prevention and treatment of diseases. The contributing authors in this edited book present representative surveys of advances in their respective fields, focusing in particular on techniques for the analysis of complex biomedical data. The book will be a useful reference for graduate students, researchers and industrial practitioners in computer science, biomedical engineering, and computational and molecular biology.
Visa hela texten

Punam K. Saha received his Ph.D. from the Indian Statistical Institute in 1997. He is an Associate Professor at the Univ. of Iowa, USA, having previously been associated with the Medical Image Processing Group of the Univ. of Pennsylvania, USA. His research interests include medical imaging. Ujjwal Maulik has been a Professor in the Dept. of Computer Science and Engineering, Jadavpur University, Kolkata since 2004. He led the Dept. of Computer Science and Technology of Kalyani Government Engineering College from 1996 to 1999. He has collaborated and lectured at many institutions, including the Los Alamos National Laboratory, USA, the Univ. of New South Wales, Australia, the Univ. of Texas at Arlington, USA, the Univ. of Maryland, Baltimore County, USA, the Fraunhofer Institute AiS, St. Augustin, Germany, Tsinghua University, China, the Univ. of Rome, Italy, the Univ. of Heidelberg, Germany and the German Cancer Research Center. He received the Government of India BOYSCAST fellowship in 2001 and the Alexander Von Humboldt Fellowship for Experienced Researchers in 2010-2012 and he has coordinated a number of Erasmus Mundus Mobility with Asia (EMMA) programs. He has coauthored 8 books and more than 250 research publications; he has been program chair for many international conferences and workshops, he is on the editorial board of many journals, and he is a founding member of the IEEE Computational Intelligence Society (CIS) Chapter, Calcutta section. His research interests include computational intelligence, bioinformatics, combinatorial optimization, pattern recognition and data mining. Subhadip Basu received his Ph.D. from Jadavpur University in 2006, where he is now an assistant professor. He has also worked as a visiting scientist at Hitachi (Japan), the University of Warsaw and the University of Iowa. His research interests include medical image analysis, pattern recognition and bioinformatics.