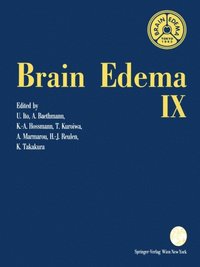 Proceedings of the Ninth International Symposium Tokyo, May 16-19, 1993

av Umeo Ito, Alexander Baethmann, Konstantin-A Hossmann, Toshihiko Kuroiwa, Anthony Marmarou
E-bok (PDF - DRM), Engelska, 2012-12-06
1039
Ladda ned
Spara som favorit
Laddas ned direkt
Läs i vår app för iPhone och iPad
Finns även som
Visa alla 1 format & utgåvor
The first international symposium on brain edema was held in Vienna/ Austria in 1965 followed by altogether eight meetings since. The most recent was organized in Y okohama by the Department of Neurosurgery of the Musashino Red Cross Hospital, Tokyo. The continuing interest of both, clinicians and experimental scientists alike may be attributable to the fact that brain edema is a common denominator of many cerebral disorders, which under acute conditions threatens life and weIl-being of afflicted patients. Although progress in understanding as weIl as treatment can be recognized since 1965 many problems remain, particularly concerning the control of brain edema under acute conditions, as in trauma or ischemia. A quantum leap was the distinction of the cytotoxic and vasogenic brain edema prototypes as advanced by Igor Klatzo, providing for transition from a morphological to functional understanding now. The recent brain edema meetings were certainly benefiting from developments of both, molecular neurobiology on the one hand side and functional brain imaging at an ever-increasing resolution on the other, such as magnetic resonance imaging orpositron emission tomography. The international symposium in San Diego 1996 may witness further breakthroughs, hopefully also of effective treatment modalities. The symposium in Y okohama was dedicated to the &quoteLegacy of 28 Years of Brain Edema Research&quote as a reminder of accomplishments as weIl as remaining challenges.
Visa hela texten