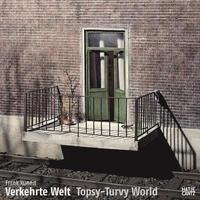 av Thilo Von Debschitz
Inbunden Engelska, 2008-02-01
220
Köp
Spara som favorit
A multistoried apartment building. Its plaster is grayish beige and exudes a kind of petit-bourgeois tristesse; it has the requisite carpeted balcony railings, the lone flower box, even the deckchair is there. A familiar view. It is only on second glance that we see that something is wrong. All of the balcony doors lead to nowhere, and in turn, the balconies themselves cannot be accessed.German photographer Frank Kunert (*1963 in Frankfurt/Main) has not uncovered any sort of architectural scandal. With Balcony is one of the works that sensitively and enigmatically turn familiar narrative contexts upside down and question reality itself. Far from being simply photographic satire, Kunert's miniatures give three-dimensional form to puns on thoughts and words, making them tangible in the truest sense of the word. Kunert spends weeks constructing his model sets down to the smallest detail and then photographs them in his studio-in the process, creating the antithesis of worn and hackneyed concepts and ideas. Exhibition schedule: Galerie S, Siegen, February 22-March 28, 2008 * Darmstadter Tage der Fotografie, Darmstadt, April 18-20, 22008 * Galerie Camera Obscura, Dortmund, August 16-September 6, 2008 * Artbox Frankfurt, Galerie der Editionen, October 2-29, 2008 * Stadtmuseum Munster, February 23-April 11, 2010
Visa hela texten