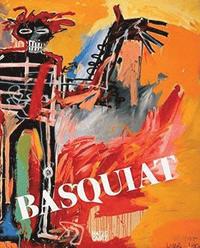 av Fondation Beyeler
Inbunden Engelska, 2010-05-24
522
Köp
Spara som favorit
American artist Jean-Michel Basquiat (1960-1988) quickly became one of art history's most luminescent personalities; his friendships with Andy Warhol, Keith Haring, and Madonna, as well as his tragic death at the age of twenty-seven, are the stuff of legend. This retrospective publication traces the artist's unique career and pinpoints his important position in art history. Basquiat's works are marked by the kind of intensity and energy that also determined the course of his brief life. In just eight years-comparable to the career of Egon Schiele-Basquiat not only managed to create an extensive oeuvre, but also to establish new figurative and expressive elements alongside Conceptual and Minimal Art. At the age of twenty-one, he became the youngest artist ever to be invited to the documenta, while his work also anticipated that of Germany's Junge Wilde movement and the art of the nineties. (German edition ISBN 978-3-7757-2592-7) Exhibition schedulde: Fondation Beyeler, Riehen/Basel, May 9-September 5, 2010
Visa hela texten