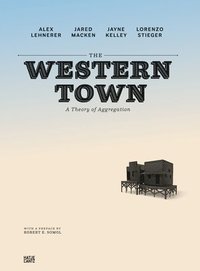 A Theory of Aggregation

av Eth Zurich
Inbunden Engelska, 2013-09-17
489
Köp
Spara som favorit
25 towns in the Wild West are the protagonists in this book, including famous places like El Paso, Rio Bravo, and Lahood-not as cliches, but as constructed reality. Detailed maps offer a previously non-existent overview of spatial contexts and form the basis for an intensive exploration of architecture and urban planning. The culture of the "city without a future" in the American West between 1860 and 1900 has been maintained in the films out of which it arises.This architectural analysis does not attempt to nostalgically reactivate the Western town, but uses it instead as a vehicle to critique contemporary phenomena in terms of infrastructure, the link between architecture and city, and the role of urban planning-after the Stranger persuaded the residents of Lago to paint the whole town red, he declared himself ready to protect it from the approaching gunmen. With maps of the towns from the following films (selected): A Fistful of Dollars (1964), Buchanan Rides Alone (1958), For a Few Dollars More (1965), Fort Apache (1948), Hang 'Em High (1968), High Noon (1952), High Plains Drifter (1973), Major Dundee (1965), McCabe and Mrs. Miller (1971), Ride the High Country (1962), Rio Bravo (1959), Rio Grande (1950), Stagecoach (1939), The Alamo (1960), The Wild Bunch (1969).
Visa hela texten