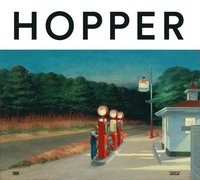 A Fresh Look at Landscape

av Fondation Beyeler Basel Riehen, Erika Doss, David Lubin, Katharina Ruppell, Ulf Kuster
Inbunden Engelska, 2020-02-27
666
Köp
Spara som favorit
Edward Hopper's world-famous paintings articulate an idiosyncratic view of modern life. With his impressive subjects, independent pictorial vocabulary, and virtuoso play of colors, Hopper continues to influence to this day the image of the United States in the first half of the twentieth century. He began his career as an illustrator and became famous around the globe for his oil paintings. They testify to his great interest in the effects of color and his mastery in depicting light and shadow. The Fondation Beyeler is devoting its large exhibition in the spring of 2020 to Hopper's iconic images of the vast American landscape. The catalogue gathers together all of the paintings, watercolors, and drawings from the 1910s to the 1960s on display in the exhibition, and supplements them with essays focused on the subject of depicting landscape.
Visa hela texten

Hopper rejected the formulas and rules that governed landscape painting before his time. While the Hudson River School and its European predecessors saw land as a well-composed, static entity, Hopper's landscapes suggest that not everything has been neatly captured in view. "Landscape is an image of nature that doesn't change, but nature is changing," the exhibition's curator Ulf Kuster recently said, mentioning the Australian bushfires and the threat of climate change. "Hopper makes changing nature visible. He shows landscape as part of something bigger, something that is perhaps beyond our control."--Lauren Ford "Art and Object" The visual bard of American solitude--not loneliness, a maudlin projection--speaks to our isolated states these days with fortuitous poignance. [...] I haven't seen "Edward Hopper: A Fresh Look at Landscape," a large show at the lately reopened Beyeler Foundation... I take its fine catalogue, edited by the exhibition's curator, Ulf Kuster, as occasion enough for reflecting anew on the artist's stubborn force.--Peter Schjeldahl "New Yorker" Casting a caustic eye on modernity and a watchful one upon nature, Hopper ranks among the most haunting of the last Romantics.--David Anfam "Art Newspaper" Edward Hopper's world-famous, instantly recognizable paintings articulate an idiosyncratic view of modern life, unfolding in a world of lonely lighthouses, gas stations, movie theaters, bars and hotel rooms.--Editors "ARTFIXdaily"

EDWARD HOPPER (1882-1967) is the master of American Realism. His paintings captured life during his era. His method of painting rapidly became the stylistic foundation of a type of American modernism. A source of inspiration for countless painters, photographers, and filmmakers, his body of work continues to be influential to this very day.